I got a pocket full of kryptonite.... 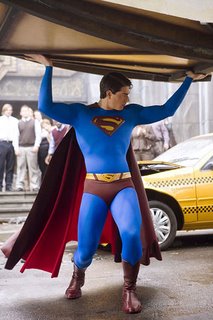 I suppose I quite enjoyed Superman Returns. The special effects were pretty decent and there's undeniably something thrilling about seeing our man leaping over tall buildings in a single bound, flying faster than a speeding bullet, saving doomed aircraft etc. etc.

The thing is though, that there's only so much you can do with a Superman film, isn't there? He's invulnerable, and ultimately that's pretty boring, so you know that at some point he has to lose his powers and get the crap beaten out of him. Then you know that he will regain his powers and truth, justice and all that other stuff will be restored.

Without going into details, that's pretty much exactly what happens here.

They're talking about a sequel, apparently. Let's hope they bother to think up a decent plot first. I'm guessing that Brandon Routh's Christopher Reeve inpersonation -- good though it is -- will soon wear a bit thin.

And I've seen enough of Kevin Spacey doing Gene Hackman doing Lex Luthor too. What about introducing a proper villain like... um... Nuclear Man? (yeah, Batman did get all of the good villains in the DC Universe didn't he?)

I'm more of a Marvel man really.
Posted by swisslet at 21:01