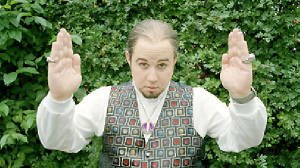 So, as I was saying, I went for an initial consultation with the hypnotist today. It was just a complimentary getting-to-know-you session, and a chance for me to see if it was something I fancied giving a try. It was also a chance for the hypnotist to ask me a few questions and to assess if he thought he could help me.

It was quite interesting.

The long and the short of it is that I've booked a session for next week, and it's likely to be the first of a number of sessions, perhaps as many as half a dozen. I didn't actually get hypnotised this evening: instead we spent a bit of time talking about my background (family, school, do I drink, do I smoke, do I have a history of depression, has anything been on my mind recently - that kind of thing) and we discussed what I was hoping he could help me with. I know that this may be hard to believe, but apparently the problems I have with my glasses could actually be about something other than my glasses.

For this reason, suggestion therapy isn't likely to do much more than push the manifestation of that underlying anxiety somewhere else. The better bet is to see if I can get to the root cause. It might be that I am worrying about my specs instead of worrying about something far more important - the WT's or my job perhaps. Perhaps it's something to do with a fear of abandonement or a fear of the clown I once met at someone's birthday party when I was five. Who knows?

Anyway. My first session is on Monday. I thought it was worth a try. I've been a lot better generally since I decided to do something about this, but I'm not going to let that fool me into not going ahead with it - and if this doesn't work, I'll try something else..

Just so you know though, I don't think I'm going to be blogging about it, except perhaps in passing. It's not that I wouldn't want to share the deepest, darkest secrets buried in the smothering blackness of my subconscious mind. It's just that apparently it's better to let anything that comes up tick away slowly in my head without trying to consciously analyse it, dissect it, or even really talk about it. As a blogger and an INTP, I'm thinking that this could be the biggest challenge of all.

Still, the first rule of hypnotherapy is that we do not talk about hypnotherapy, and rules are rules. It's a lot like Fight Club in that regard, only with a whole lot less fighting. And no smoking*.

Rather disappointingly, apparently you don't really go into a trance either. I suppose it's all very clean and clinical to be hypnotised in a matter of seconds, but I was rather hoping for some swinging pendulums and the whole "you are feeling very sleepy" schtick.

* This has now got me thinking about who would play me in the film version of this blog. I'm not sure that Brad Pitt would get the gig, but I don't really see myself as Edward Norton either. Any suggestions? I also want to know what my Power Animal is. I was kind of hoping it was a Grizzly Bear, but I imagine it's probably a hamster.