I'm sitting in the railway station, got a ticket for my destination... 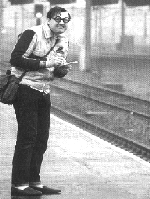 Whilst sitting patiently at Newark station waiting for my train, my attention was caught by a man in a shirt and tie running down the platform with an expensive looking camera. I watched him for a few seconds and wondered if he was like that guy who hangs around in Heathrow airport looking to take photos of the famous as they pass through - photos he will then sell on to various agencies and magazines and so on. To be honest, it didn't seem all that likely that anyone famous would be getting off the train in Newark on a Friday evening, so I went back to my book.

A couple of minutes later, another couple of people caught my eye. They appeared to be a couple, but the man had a pair of binoculas and a notepad. They appeared to be in an animated conversation about something as they walked down the platform towards me. As they got closer, I could hear that they were talking about trains.

They were trainspotters, of course.

Now I looked more carefully, there seemed to be about five or six of them on the platform. They were all in their fifties or sixties and they all appeared to know each other. They were gathering at the furthest end of the platform and pointing down the tracks. The man with the camera reappeared and hurried down the platform to join the others. I peered down the tracks, but couldn't see anything of note so picked up my book again. I was forced to look up again by a loud shout and a whistle. A man had emerged from the ticket office and was being hailed by the people at the end of the platform:

Fred heard this and immediately began running down the platform with his camera at the ready. I shared an amused look with another passenger waiting for the 19:35 service to Newcastle-upon-Tyne. I have no idea if my train was notable or not, but it was certainly on time.

It seems an odd way to spend your time, but live and let live, eh? They probably think that some of the things I do are pretty odd too.

And they'd probably be right.
Posted by swisslet at 19:59