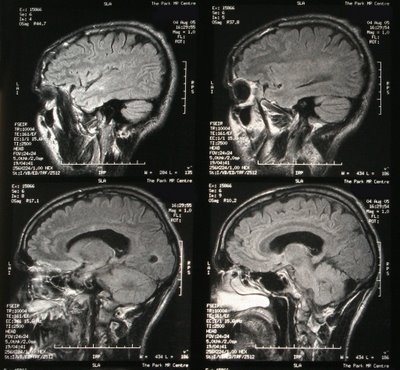 I went to the neurologist again yesterday. (If you're not sure why, then you can start here and follow the links from there, ok?)

It's been over a year now since I first noticed the symptoms; a year since I woke up that morning, noticed the pins and needles in my right hand and just assumed that I must have slept on it funny. Apparently not. In all that time, the neurologist has resolutely never made a diagnosis - at least not one that he's shared with me. Initially I think that this was because he wanted to see if it just went away, and when it didn't, I think he was waiting for more symptoms to arise so that he could be categorically sure. The nervous system is an amazing thing - if I hadn't appreciated that before, I really do now - and I'm rapidly learning that there's a whole lot of stuff that doctors don't know about it. Why rush to a diagnosis? Why risk getting it wrong? Better to wait until it is really, really clear what the problem is. I suppose I can see where he's coming from, but it's been difficult. Something's changed: today was the first time in any of our sessions that he used the words "Multiple Sclerosis", and he used them three times in all. He wasn't making a diagnosis, but it feels like another step down that particular road.

Last time I went, he told me that there was a good chance that I would suffer another "attack". By this, he means that I will wake up one day and will find that I will have a whole new set of symptoms. I actually had a dream the other day where I had lost the use of a leg. I don't think that in my dream this was specifically due to the WT's, but the dream was about how I was trying to come to terms with this. I couldn't run, I couldn't play football, I couldn't do anything much. My life was being forced to change radically, and it hit me hard. It was a shit dream, and it's hard not to dwell on the fact that this is actually something that might happen. Yes, I know I might also get run over by a bus tomorrow, and I know I can't spend the rest of my life worrying about things that may never happen.... but it could happen and it might happen.

Actually, I haven't had another attack - I may never have another attack - but my symptoms have been getting worse. Exercise is getting harder. I'm still able to do all of the things that I used to be able to do, but they're getting more difficult and my endurance seems to be diminishing. As well as the weakness across my arms and shoulders and the pins and needles in my hands, I have now got some significant numbness down my thighs and on the soles of my feet. C. remarked to me the other day that she could tell that things were getting more difficult because she is now comfortably able to keep up with me in the pool. It's not just exercise either: I went to a party last night, and at the buffet I suddenly realised that my arm was shaking under the weight of the plate. And yes, I do wish this was because I had laden the plate down with oodles of the delicious thai food, but it wasn't.

It's starting to get on my nerves, to be honest.

And today my neurologist decided that we needed to do more than just sit and wait for something to get worse, and he's sending me to go and see another neurologist to get some tests done. He was a bit sketchy on the details, but he muttered something about a spinal tap (oops, there goes an earworm) and stuff like that. He also warned me that this new guy would be likely to start me on some drugs for MS (like beta interferon - which I think is usually administered through injection, and frankly sounds a bit scary, especially as you have to do the injecting yourself).

I'm not sure what I think about this. On the one hand, I reckon that it is a whole lot better to be doing something than to be doing nothing. On the other hand though, this is starting to sound a bit heavy.
Posted by swisslet at 10:35