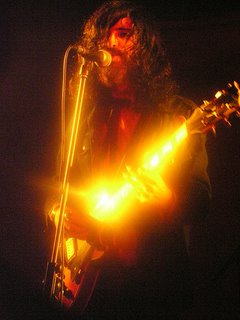 Whilst I was waiting for C. to finish having her feet done yesterday afternoon, I spent a very happy half an hour at a Virgin Megastore listening post. It was right next to the heavy metal section, so it meant standing next to some rather odiferous teenagers with painted nails and Korn t-shirts, but I was listening to Rage Against The Machine, so actually that was ok. I had originally gone in there to check out the new Audioslave album, but those little 30 second snippets of Tom Morello's savage riffing just made me want to get back to basics and to listen to the real deal. They say jump you say 'how high?' etc.

I mention this simply because I spent my evening surrounded by thoughtful, bearded folkies at a concert. I saw a lot of floaty dresses and tie-dye fabrics, but I certainly didn't see many Rage t-shirts, that's for sure. 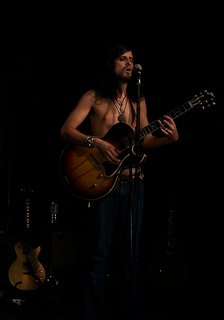 Actually, the contrast between my visit to Virgin and the gig wasn't so great. Yes, I had spent my time listening to Zack de la Rocha's furious invective, but the CDs I actually purchased were "Cole's Corner" by Richard Hawley and "Seven Swans" by Sufjan Stevens - both albums that have a lot more in common with the folk movement than Rage Against The Machine. Quiet is the new loud, and all that.

In common with the way I seem to discover many artists, I first saw Devendra Banhart when he performed on "Later... with Jools Holland". He only played one song, and it was just him and his acoustic guitar, but it was enough. I went straight out and bought "Rejoicing in the Hands" and haven't looked back since. I don't think there's anything else in my record collection quite like it. Yes, I've got lots of acoustic albums and even some that could be described a folk, but this is different. Apparently the genre is called "psych folk", so wikipedia tells me, and is "known for a peculiar, trance-like, and atmospheric sound. Its lyrics are often concerned with such subjects as the natural world, love and beauty and try to evoke a state of mind associated with the effects of psychedelic drugs"

I suppose, given that one of Banhart's songs is sung directly to a little yellow spider, once cannot rule out that last bit.... 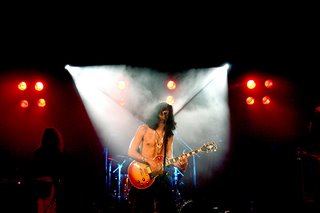 Support was provided by Vetiver, a band which Banhart is a sometime member of, and who later served as backing band to the man himself. They were okay - fairly quiet and folky as you might have expected, but suddenly cranking up towards the end of their set and doing a few much rockier songs that sounded pretty good. After a short wait, Banhart himself took the stage with an electic guitar. I'd been expecting him to play acoustically, but he actually used his Les Paul and the support of the backing band all night. He was excellent. He's an extremely prolific songwriter, and although I've got two of his last three albums, I only really recognised a couple of songs. It didn't matter though. Banhart is tall and wiry, and he comes across as something of a force of nature as he performs behind his guitar; he's a blur of snakey hips and waving hands. He's also got a very engaging line in banter with the crowd. He gave us sage lessons on dancing (apparently we only need to remember two things: number one - pan out to the universe and imagine you are looking back at yourself. You are an ant. No one cares about you dancing. Number two - imagine you are at a dance class with your mum and her friends: there's nothing to make you feel embarrassed so you can just go for it. Hmm). Twice during the gig, he also stopped what he was doing and asked if anyone in the audience wrote their own songs. He then selected someone from the crowd, pulled them up on stage, gave them his guitar and retreated to the wings to watch. The first guy was pretty good (albeit he really needs to find his own singing style and not copy Banhart's). I have a feeling he was a stooge though, as he appeared to be friends with Vetiver's guitarist. The second girl looked genuine, although perhaps she should have thought about remembering the chords to her song before she stuck her hand up.

In other news, I'm going to be an uncle! My elder brother and his wife proudly announced this morning that they are expecting a baby in March next year. Congratulations to them both. 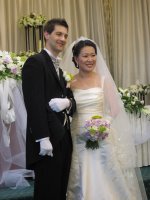 As you can see, the raw material is pretty good, and they both have PhDs.... so I think that kid's going to do just fine in the genetic lottery.

Plus one for the wedding in Vienna then.
Posted by swisslet at 13:15