Here's a question for all you philosophers and quantum physicists out there: is it possible for weeks to pass more slowly and for time to travel more quickly at the same time? It must be: why else would it be that every individual day seems to drag on interminably, but the weeks and years seem to fly by? Isn't that some kind of paradox? Every week I ask my colleague Steve how his family are getting on, and his daughter is another year older.

How does that happen?

Anyway. This week's Guest Editor is an old, old friend of mine. He's just given up his job, rented out his house and, as of Sunday last week, buggered off on a trip around the world for the next year or so.

Most revolutionary of all, and after years of taking the piss out of me, Statue John and the Ultimate Olympian for having them, he's set up a blog of his own to tell us all about his trip. So far he's met some penguins in Cape Town, felt a bit wobbly on Table Mountain, and been moved by the spirit of reconciliation on display at Robben Island... It's all very exciting, and he hasn't even got to the MCG yet.

Apparently, he also thinks that having a blog now qualifies him to become a guest editor, so immediately before he got on his plane, he emailed me a list.

Ladies and Gentleworms, without further ado, it is my great pleasure to present for your earworming pleasure..... 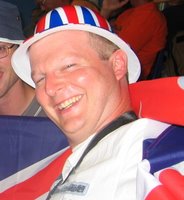 11 The Stone Roses. I am the resurrection.

I had my ten, but then this is never far from my ear, and I’m not leaving any of the others out. So I’m having 11 (unless I get cheated by Swiss). Fills any dance floor, as it should.

It comes on shuffle and immediately it’s 1985, it’s Saturday, my best friend and I are eating burgers in front of the TV and we’re concentrating. Hard. The machine gun noise kicks in and we’re transported to the Los Angeles underground and we cannot imagine that anything ever will be better than this. We may have been right. If good music is meant to move you, then this puts a big tick in the box.

9 The Mavericks. I just want to Dance the night away.

Dale Collins Quiz night. The White Horse, Oxford. The music round (that we have NEVER won in 10 years of living in Oxford). We’ve got the first dozen name the artists right. Then this comes on; we know it; I can visualise the video; Statue John’s played it while DJ’ing a wedding; can we remember their name? Can we fuck. And the wheels come off. Still not won that music round-and I thought fate would be on my side for my last night in Oxford.

8 Lightning seeds. Ready or not.

Cracking band, great song and it really struck a chord with my shambolic attempts to prepare for my travels.

7 Madness. One Step Beyond.

Perhaps the most English band of all time. When you leave all your friends and family behind for an extended period, I think you’re allowed some dark thoughts. This is the song I want played when my friends carry my casket into my funeral. (and just in case some snake does bite me, I do mean that). [ST's note: is this song really long enough to give us to stagger all the way up to the altar? Can I suggest something a little longer? Wagner's Ring Cycle, perhaps?]

6 Coldplay. Swallowed in the Sea.

For me, the best song off their best album. Anyone who knows me will realise the choice of Coldplay is by no means an attempt to creep to Swiss. In fact speaking of favourites of Swiss, good to see the Darkness’ career flushed back down the toilet it had been trying to creep out of. [ST's note: it's stretching it a touch to suggest that I think Coldplay and the Darkness hold similar places in my affections. The Darkness are obviously a vastly superior band.]

You see the Patrol aren’t just anthemic crowd pleasers. Martha Wainwright guests. So many collaborations are just cynical marketing ploys to expose an artist to a different demographic through another artist’s fans in the hope of selling a few more records (anyone for Blue and Elton John? Or Brian May and Five?) Whereas this is simply brilliant song, that happens to be a collaboration.

I have quite a lot of Bowie, yet I always feed I should have more. I’m not sure if this is a song that a lot of people know-it always seems like a hidden gem to me. Beautiful

Songs about the first World War aren’t supposed to be uplifting, but this is a song that always me think of my friends and how lucky I am to have them. Guaranteed to pick you up.

So, I’m going off travelling for a while and feel the need to watch some favourite movies before I go. Cue Road Trip, which the Ultimate Olympian needs to watch pronto. One of the funniest scenes I can think of in any movie and much use of this belting song. Make you want to go on a road trip with your mates. And steal a school bus from a blind chick.

This is really the entire top 5 - I’ve been singing it to myself all week long. Just a great song, and really in tune with where I am just now.

Thanks very much mate. Bon voyage and all that. Does the fact that you will be blogging about your time away mean that I won't be getting a Hoff postcard from somewhere exotic, or even a cheeky one from the SCG?

Interesting Fact: Poll Star is exactly 3 days older than me (and no wiser).