One of the most important things I have learnt as a man is that if you are with a bunch of guys that you barely know and it looks like you might be about to reach an uncomfortable silence, you can always talk about football. Always. It doesn't matter how much the person you are with despises the stupid bloody game, you can always just talk about that. It's absolutely foolproof. I once went to a work function where I was forced to sit on top table with a member of the executive. Before the dinner started, I was given a little CV of his career and the things he was interested in - this guy listed "orchids" as one of his interests. This looked like it was going to be a long and tedious dinner until I found out that although this guy professed no interest in any sports at all, he had supported Liverpool as a child. That's all I needed, and the poor guy probably didn't know what hit him.

Sport has always worked well for me when I need an emergency pub conversation ice-breaker, but I've noticed that other people have different conversational defaults - the most popular being music and cars. Obviously I have no problem with music and can talk about that until the cows come home, even if I'm telling you that your ears must have been painted on. Cars I find a lot more difficult. The thing is that I've never really been all that interested in cars. If you ask me what my dream car is (and this is a popular opening gambit), I will always reply that I don't dream about cars.

I have owned a few cars in my life, but none of them have been remotely flash: a vomit-coloured Ford Fiesta with a broken fan, a white Fiat Panda 4x4, a Suzuki Swift, a Ford Focus. All very drab, practical and un-exciting. All perfectly good at carrying me from A to B with a minimum of fuss, and that's basically all I've ever required of them. I never had a poster of a Ferrari on my wall as a child and I don't aspire to an Audi TT, a Mercedes SLK or a McClaren F1.

I suppose that's a conversation in its own right, but it does rather cut the other guy down in his conversational prime as he prepared to tell me all about how many BHP his passion wagon has or how beautifully it glides from 0-60 in 12 parsecs..... 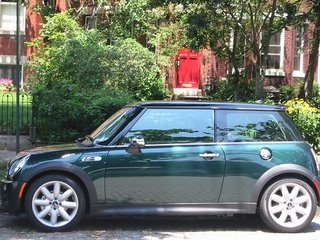 If I was to get one of these it would be in British Racing Green with 2 white stripes on the bonnet....

I've driven one before and I fit in it fine, but part of me thinks this is a completely ridiculous car for a man of six foot five inches to be driving.

What do you think?

And yes, I do realise this is starting that emergency pub conversation. If you'd prefer to talk about football instead, just let me know.
Posted by swisslet at 20:54