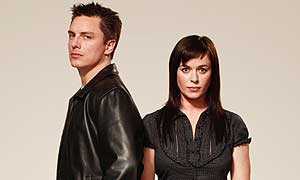 Right. That's it. I gave it a couple of episodes and swallowed my general scepticism about a 'more adult' Doctor Who spin-off. The alien who fed off orgasmic energy was bad enough, but I just watched tonight's episode on BBC3 and it was utter rubbish.

Sentimental. Stupid. Badly acted. Poorly scripted. The lot. The Cybermen were stupid in the last series of Doctor Who, and they were very ill-advised to bring them back.

Thanks but no thanks.

I have officially decided that Torchwood is shit.

I didn't much care for the last series of Doctor Who either. It started off alright, but the longer it went on, the more I found it to be childish and not half as clever as it thought it was.