It's the hap - happiest season of all... 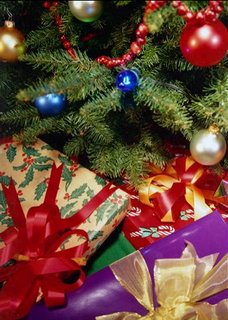 Just in case you hadn't noticed yet, 'tis apparently the season to spend money.

Given that retailers start pushing Christmas at us some point around the end of August, I suppose I'd done pretty well to let all the seasonal hoo-har pass me by thus far.... but it finally got its claws into me today when I suddenly had an inescapable feeling that I should be out buying people presents.

I resisted, of course, but it won't be long before I will be forced to surrender.

When I first started buying gifts for people with my own money I was a classic last minute shopper. I would wait until Christmas Eve before rushing out and getting everything in one go. As time went on I began to take a bit more care over what I bought people. I've never been a long-range planner, and I certainly don't go out into the January sales looking for bargains, but I do try to have a think about what my immediate family might like. Sometimes I wonder why I bother, especially the year where the best thing that I got given was a giant plastic Budweiser money bottle, but there is certainly pleasure to be had in the giving.

I don't think I've got a free weekend between now and Christmas, but at some point I am going have to sit down and have a think about what to get, and then actually brave the shops and try and buy stuff. I suppose I could risk the internet, but as we go into December, I'm less and less inclined to trust their delivery promises.

But for heaven's sake! It's not even December yet and advent hasn't started. Why on earth am I starting to feel pressure to go out shopping?

What are we celebrating again?

I'd go back to Oxfam and pick up something from their range of goats, donkeys, chickens, mango saplings, text books, safe water and the like from their Oxfam Unwrapped range.... and I still might.... it's just that whenever I see their tagline ("famously funusual gifts"), I want to kill someone. Is that so wrong of me? Funusual? is that supposed to be funny? clever? what?

I'm not quite ready to shout "humbug" just yet, but I won't be decking my halls any time soon.

And no, I won't be going to my work Christmas party next week either. Stuff them. They've treated me like an idiot all year, so I'm buggered if I'll be all smiles and have a drink with them - particularly as all they've troubled to organise is a couple of lanes at the local bowling alley and a basket of fries. No thanks.

It's true that no one's actually troubled to chase me to see if I'm coming or not yet.... but I'm sure my absence will be keenly felt by everyone. That'll teach them to mess with me, eh?
Posted by swisslet at 19:39