dream about the days to come....

I wasn't very productive at work today. Well, actually that's not true - I was productive, I just didn't do a jot of work. The upshot of all of my efforts is that I am now the proud owner of two e-tickets to Quito in Ecuador.

There was some debate about whether or not the best route to take would be via Madrid and Bogotá with Avianca, or if we would be better off going via Miami with American Airlines. In the end, the timings of the return flights swung it and we're going via the USA (who wants to get home from 3 weeks holiday in the middle of the night on a Sunday when they have to go to work on the Monday?).

I'm a little nervous about the transfer in Miami though. If everything goes according to plan, we'll have something like three hours to make the connecting flight, but I understand that US Customs will make us pick up our baggage, go through customs and then check in again before we can make our connection. If we miss the connection, we'll have to wait 24 hours for the next one. Well, we'll just have to take our chances.

I've also not exactly heard rave reviews about American Airlines either. To be honest though, as a man of nearly six foot five inches, I tend to approach any long-haul flight in economy as something to endured, so my expectations are usually pretty low anyway. I'm sure it will be fine.

It suddenly all feels very real. I even had a call from my credit card company about five minutes after I bought the tickets. They just wanted to check that it was me using my credit card and not anyone else. They were very, very polite about it, and I was thoroughly reassured.

We leave on March 2nd next year. It's a kind of pre-wedding honeymoon, so I'm hoping it will be brilliant. Here's a quick glimpse at the schedule.

Friday --> arrive in Quito late and transfer to hotel in Otavalo (about an hour away)
Saturday --> Visit the largest craft fair in South America
Sunday --> visit some villages and then transfer to Cuicocha, situated alongside a lake in a dormant volcano and the entrance to the Intag Biological Reserve (pictured below)

Monday - Friday --> trek along the Andean plateau and down into the Intag Biological Reserve. Includes a day horseriding in the cloud forest. 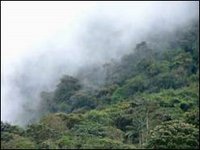 Saturday --> A spot of rafting and horse riding and a visit to a fairtrade coffee project
Sunday --> transfer to Mindo Biological Reserve
Monday --> Birdwatching (humming birds, toucans, parrots and the like) 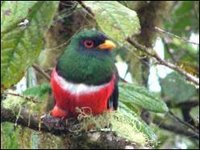 Thursday - Saturday --> transfer to Banos and Riobamba for some more beautiful scenery and a train ride through the Devil's Nose.
Sunday --> Back to Quito
Monday - Friday --> Fly out to Amazon and take a 5 hour boat ride up to the Yuturi Amazon Lodge
Saturday --> back to Quito and fly home.

Sounds pretty good to me.

It's a fair trade tour, but I think I'm going to need to look into making us carbon neutral for all that flying. Between the two of us, we will be flying about 20,000 kilometers thus contributing something like 4.4 additional tonnes of carbon dioxide into the atmosphere (calculated here). That's £32 of natural woodland portfolio in the UK, apparently.

OK done - all woodland purchased and we're ready to go.

Roll on March. By my calculations, I will turn 33 somewhere near the summit of Mount Yanaurca....
Posted by swisslet at 22:08