in the night the fire is burning bright....

As if it wasn't enough that I have a roof over my head, a warm bed and plenty of food to eat, I also got some really nice stuff for Christmas this year... some books, Seinfeld series 7 on dvd (it's the one with "the soup nazi"), a scarf (to replace the one that I lost, although C is currently knitting me a scarf herself - a real labour of love that I will treasure), a Violent Femmes CD, a very nice woven tie, some scent, a few bottles of wine, some skiing socks.... I'm really very, very lucky.

Do you know what really grabbed my attention though? It was an Iron Maiden t-shirt from Lord B, Hen and Maddie. 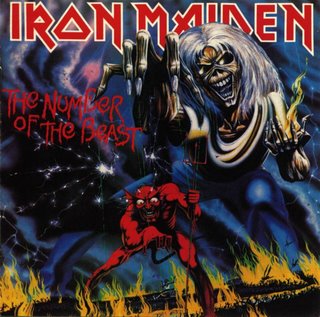 Ah, now there's an album - one of the first that I ever bought for myself, and one that had a profound influence on my taste in music. It's a very, very thoughtful gift. It horrified C, naturally, but I love it and I will wear it with pride.

I went for a nice long run this morning, and in spite of the usual enormous lunch, I'm still feeling virtuous enough to plan to do nothing more with the rest of my day than to sit in front of an open fire with my betrothed and drink some wine.

In spite of the fact that we have a house full of my parents, my two brothers and all three of our various partners (and a Korean friend of my elder brother's wife who doesn't speak much English), we haven't even had any major disagreements in our house yet either. But hey! the night is yet young, so I haven't given up all hope yet!

Did I ever tell you the story about my dad's cousin Anne? She has three grown-up kids, and last year my dad decided that instead of sending them each a fiver, he was going to do something different and he gave them a latrine in Africa (or something like that - one of those things you can buy through Oxfam anyway). On Christmas Day, he received a phone-call from his cousin. Did she thank him for such a thoughtful gift? No. She berated him for essentially stealing the food from her children's mouths. I was flabbergasted. How can you be so ungrateful as to not only expect something for Christmas, but to have the audacity to ring up and complain about what is actually a very nice gesture.

I thought that would be the end of it, but apparently this year, my dad's cousin rang him up a few weeks before Christmas to make sure that this never happened again, and to make sure that her kids got "proper" presents this year. Unbelievable. Sadly, my dad caved in to this and have given these "kids" (all of whom are over 25) cash.

What did this cousin give to me and all my brothers? A Christmas card. Now, don't get me wrong - I don't want anything from this woman. The point is, though, that I'm not expecting anything from her. She appears to be totally oblivious to her double-standards, but I do fervently hope that she takes the lack of an invitation to our wedding in June as a snub. I'd say it was nothing personal, but I see her and her family as everything I hate about weddings and there is no way on earth that any of them are going to be at mine. This cousin accosted me at my elder brother's wedding and berated me for not having introduced her mother to C. At this point, C wandered over, so I took the opportunity to introduce her to them.
"Oh, we've already met. We introduced ourselves...."

Life is far too short to have to deal with that kind of nonsense, isn't it?

I'm rambling now, so I think perhaps I should go back to my wine and to Doctor Who now....

Merry Christmas to all and to all a good night!
Posted by swisslet at 18:13