too long trying to resist it...

Considering how much time I spend flogging my body through various forms of exercise, I've never been even the remotest bit interested weight training. I just can't see the point of it and I've never wanted bulked up muscles or a six-pack enough to put myself through it.

Cardio-Vascular exercise I get: I run because it makes my heart and lungs stronger and because it makes me feel good. Any other changes to my body that happen as a result of running are just happy by-products. In the main, those other changes are generally pretty good things: I can eat what I want and not put on weight and I have long, lean muscles in my lower body (or so I'm told, anyway). One of possibly less attractive side-effects of doing so much running is that I have a puny upper body. I've always been hopeless at things like press-ups and pull-ups, but a decade of running and little else has meant that the musculature in my arms and chest is, shall we say, rather minimalist. 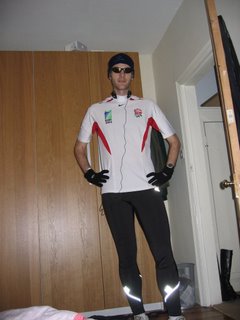 for more full-on puny body shots, click here or here... but don't say I didn't warn you
(and no, don't worry, they're not *that* full-on)

I've never much cared, to be honest. I've got broad shoulders that go a long way when you're wearing a t-shirt, and besides, I've got the physique that reflects the exercise that I do... and I don't want to be hauling a load of deadweight muscle around on runs, do I?

Well, I went to the osteopath this evening, and things are going to have to change. I mentioned the other day how I was finding it harder to go swimming; how I was really noticing a loss of power across my shoulders and down my arms. This is one of the legacies of the WTs, and I have been keeping a weather eye on this for a while to see if this loss of power is getting any worse. I have been told by my neurologist that the amount and intensity of exercise that I do is probably going to make me feel my symptoms more heavily. Well, at the moment this is a trade-off that I am more than happy to make. Partly this is because it is one of the things that helps keep me sane, but it's also partly because I am already finding exercise harder and I am worried that if I stop altogether, I will find it harder and harder to get started again. I don't want my muscles to waste.

This evening, I was told that the muscles in my upper body have already started to waste. I have lost definition across my pectoral muscles and down my arms. If I don't take action now, then this may prove to be an irreversible decline, as my muscles will not be able to tolerate the exercise needed to build them back up.

Well that's a bit depressing, isn't it? I think I'd better do something about that....

Courtesy of my osteopath, I am now the proud owner of a little exercise schedule. It's not much, but the idea is that it will arrest the decline and will start to try and gently build my muscles up. I am going to have to go out to the shops and buy myself a modest pair of dumbbells, and I will start to do a few biceps curls, shoulder shrugs and deltoid lifts. I will also start doing a few press-ups and some triceps dips. Nothing drastic, just two or three sets of each exercise three times a week, with a day's rest inbetween. Too much will probably cause my symptoms to flare up and I'll have a reaction in my muscles, but hopefully this should be just enough to start to get my muscles back into shape. I'll also be getting myself some weights to carry when I'm running. They're basically either something that you can velcro to your wrists, or they're a nice natty set of miniature dumbbells (ideally pink) that you carry around. The idea is that you are forced to gently exercise your upper body as you run, instead of just carrying it around....

It's not something I'm looking forward too very much, but it's a whole lot better than the alternatives. Needs must, and all that.
Posted by swisslet at 19:20