so be good for goodness sake.... 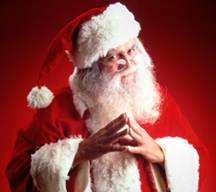 A couple of years ago, a colleague of mine asked me if I would mind pretending to be Santa Claus and write a letter to her five year old daughter (details here). Not having any kids of my own, it was actually really nice to get a glimpse into a totally different world - a place where Christmas is still magical and where Father Christmas really does exist.

My colleague told me the other day how her youngest daughter Hannah came home from school, went to her room and pulled out her folder with all her special things in it. She pulled out the letter from Santa and spent a couple of minutes looking at it. She then put it down, wandered over to her mum and asked if she could see a sample of her writing (apparently she already knows what her dad's handwriting looks like). My colleague showed her some of her writing, and she took it away. When she thought her mum wasn't looking, she carefully compared the two bits of writing, looked a touch confused, and put the letter from Santa away again. She's now 7 years old, and is probably just at the age where she is starting to hear that Santa might not be real (although apparently not at an age where she might think that someone other than her mum, dad and Santa Claus might have written the letter). Her faith in Santa apparently confirmed, both Hannah and her older sister Ellie wrote their letters to Santa and left them in the chimney for collection (they've apparently both decided that Santa must have a letter fairy who delivers all these letters to Santa at the North Pole).

Having realised that any future letter from Santa was going to be scrutinised like never before, my colleague asked me if I minded terribly much getting my fountain pen out again....

Of course I didn't.

Thank you for your letter. I do have a fairy who collects my letters for me. She tends to get rather dirty, poor thing, so Mrs Claus is always having to do the washing.

The little fairy definitely prefers clean chimneys - she has told me yours is quite good. She absolutely hates it when people light fires in the chimney. Honestly, how do they expect her to collect letters when there has been a fire burning? I've told her she doesn't need to collect any letters if there is smoke coming out of the chimney.

I hope you have a lovely Christmas and enjoy your presents. Mrs Claus has done a great job on your dress up and I'm sure you will look beautiful

Lots of love from,

Thank you for the letter you wrote with your sister.

Things have been very busy in the North Pole. The fairies and the elves have been working overtime and at one stage Mrs Claus ran out of black thread for her sewing machine. She had to send the letter fairy off to get some more. Actually, I think she might have been making your costume at the time. My, that WAS a bit of a challenge! I'm not sure she has ever made one quite like that before!

As the weather is so very cold, and as we need to keep hidden, we actually live in a massive cave system underground. We have many rooms, and many hallways, and lots of tunnels down to secret cellars for storing all the presents. It is very important that no-one finds us, so there is only one entrance to the outside world. It makes it quite a challenge to get all the presents out and onto the sleigh, but a little bit of magic usually does the trick.

I hope you have wonderful Christmas with your family. It is so nice to be able to deliver presents to this address again.

Lots of love from,