you spin me right round, baby... 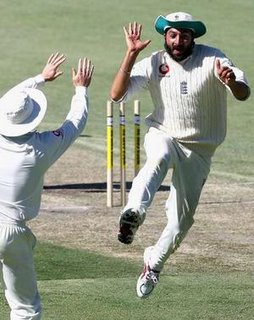 The Sikh of Tweak, The Turbanator - Mudhsuden Singh Panesar....

I've watched England for far too long to think that this Test is anywhere near in the bag, but I was certainly very pleased to wake up this morning and hear the tea time score from the WACA. You should never judge a game until both sides have batted once, but I think it's fair to say that Ricky Ponting will be disappointed with a score of 244 - particularly after winning the toss and electing to bat.

As an Englishman - and as an Englishman born in Northampton particularly - it was especially satisfying to see Monty Panesar's figures of 5-92. We will never know if he would have made any difference in the other two tests of the series so far, but he has certainly lived up to his billing so far in this game. I was also very pleased to see Steve Harmison bowling with real hostility for his figures of 4-48. He's had a lot of criticism since he bowled the first ball of the series directly into the hands of second slip, but he's a potential match winner and it was nice to see him arrive for the party.

There's a long way to go in this match yet, and God knows there's plenty of time to balls it all up yet.... but it was a good day. The Pollstar certainly seemed to enjoy himself, judging by the text messages he sent me from Perth in the wee small hours of the morning...