why do all good things come to an end? 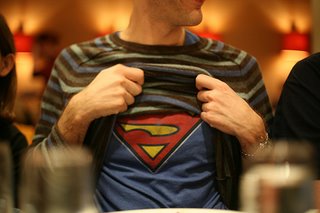 For various reasons (all far too obvious to detail again here) I’m feeling a bit mortal at the moment. The circle of life is all very well, but I could do with something to take my mind off it for a bit. What was it that Woody Allen said? “I don’t want to achieve immortality through my work, I want to achieve it through not dying”.

How about we play a little question and answer? I’ll set 5 questions, and anyone who feels like playing has a go in the comments. It’s totally frivolous, of course, but I’m making no apologies for that.

1. What would your super power be? (yeah, it's an excuse to post that picture. What of it?)

2. What animal best represents your soul? (if you are a fan of the "His Dark Materials" trilogy, I suppose this is a bit like asking you what form your daemon would take).

3. Share a happy memory or a magic moment from the last few days

1. Super power. Well, as a smart-arse, my first inclination would be to say something like “USSR”, but I’m going to resist. I suppose we’re talking here about super strength, the ability to read minds or control things made of metal… stuff like that. How about smelling really nice? All the time. That’s nearly as useful as flying and far more practical in a confined space. It’s either that or the mastery of public transport: the ability to always find the bus you need waiting at the bus stop, the train you need to catch waiting at the platform, and to find a cab for hire just when you need it. Now that would be useful.

2. Animal. C. thinks I’m a bear. I don’t know why, exactly, but I’m going to go with that. (A bear is probably too big for a daemon though, so I reckon a meercat)

3. Walking back from the pub with a simply lovely 31 year old from the tropics who has never seen snow before and can’t stop touching it, scuffing it around and giggling at the sheer joy and beauty of it all. Brilliant. That and then looking out of my bedroom window about an hour later and seeing everything all quiet, peaceful and muffled in the snow.

4. Tea? Probably a bowl of Toulouse sausage and lentil soup, but there’s just an outside chance that I might whip up some pasta. You know: hooped onions, garlic, pine nuts, mushrooms, pancetta and a Dijon mustard sauce? It’s a doddle to make and delicious and warming.

5. Earworm? I’ve been spending all week trying to influence someone else’s earworm selection, and all I’ve succeeded in doing is earworming myself: Chicago, Queen, the theme from Flashdance, Star Trekking… they’ve all been in there. The one that is most stuck though is probably “Gonna Fly Now” by Bill Conti… better known as the theme from Rocky. Just like the Grandstand theme, it’s got a very surprising guitar solo about halfway through.

Over to you lot. Only if you wanna, obviously.... but if it's all the same to you, I'd like to momento my mori another day, thanks very much.
Posted by swisslet at 18:37