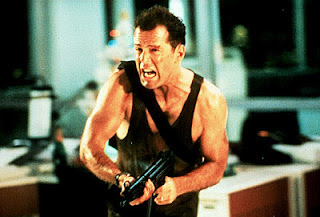 What is it about Bruce Willis?

I've never really thought of him as being all that talented: he's not that great an actor and he's certainly not much of a singer ("Under the Boardwalk" anyone?).... and yet have a look at some of the films he's been in: Pulp Fiction, The Sixth Sense, Twelve Monkeys, The Fifth Element, the Die Hard films.....there are some pretty bloody good films in there. Yeah, he's been in a few stinkers, but what actor hasn't? There are too many good choices in there for me to be comfortable with writing him off as someone who got very, very lucky.

I was very amused to read this though. Willis is currently gearing himself up for the release of Die Hard 4.0 and apparently he is curious enough to want to know what people really think of the project to go and hang around on the forums at Ain't It Cool News. Walter Bruce Willis appeared on the forums as "Walter B" and tried to convince people that he had worked on the production, had seen an early cut and that he thought that this was a damn fine film - better than the first one. Naturally, lots of people thought this was nonsense, and in the end he revealed who he really was.

Of course, no one believed him. Why would you? He tried a bit of a question and answer session, but the final straw was when one guy asked him to prove he was for real by naming the hotel he stayed in when he was promoting "The Fifth Element" at the 50th Cannes Film Festival.....and he couldn't remember the answer.

Aha! Then you can't really be Bruce Willis!

"That fact that I do not remember being at Cannes for 5th Element fucks that test up....and how would you know what Bruce Willis would remember or not remember?"

But at the end of the day, how do you prove that you really are Bruce Willis on an internet chat forum?

Answer: you give out your iChat ID and get someone to call you up. 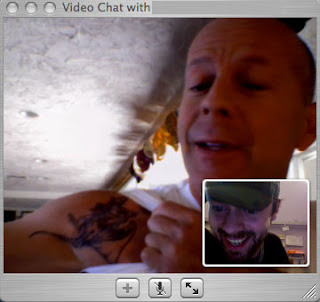 Good for him, I say.... although I am a little perturbed to hear that in order to bring Die Hard 4.0 in as a PG13, there are only two "fucks" in the whole film and John McClane doesn't smoke.

What's that all about? Please tell me that he at least wears a dirty white vest?