radioactivity is in the air for you and me.... 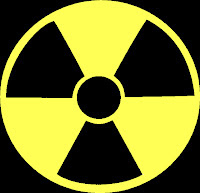 It seems that there in an ongoing debate about the safety of wireless networks.

There is some concern that exposure to all of this non-ionising radiation can damage our chromosomes or DNA or something. There's a Panorama on it and everything, and it was all over the news when I was listening to the radio this morning.

Is it just me, or should they just revise the guidelines or just shut up?

Honestly, haven't we got more pressing things to be worrying about? Global warming, perhaps? War? Famine? Natural disasters? Man's continuing inhumanity to man? The identity of the next Joseph on the West End stage...?

Then again, they used to think that smoking might help clear up persistent coughs and that mercury was good for stiffening hats*.... so I suppose you can't be too careful eh?

*I suppose that technically mercury actually was good at stiffening hats, it just wasn't such a great idea for the hatters**.

** well, I suppose that from a business point of view the hatters probably thought it was a great idea.... who wants a limp hat?

Email ThisBlogThis!Share to TwitterShare to FacebookShare to Pinterest
Labels: random