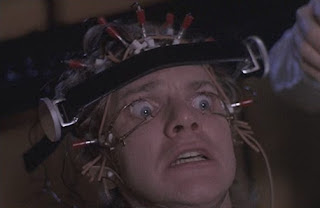 I went back to the eye doctor today.

Attentive readers may remember that I have been toying with having my eyes zapped for a little while now. Initially I was looking at one of those bargain basement Optical Express places, but in the end I came to my senses and decided that if I was even going to think about getting this done, then I should see the best person I could find and to hell with the expense. The best person turned out to be a professor of Opthalmology, and over the last few months I have had a couple of consultations with him, and a load of really detailed scans in the eye department of my local hospital.

A few weeks ago, I received a letter from the professor telling me that although my left eye was suitable for laser treatment, a combination of the astigmatism in my right eye and the size of my pupils meant that my cornea would not be thick enough for LASIK. He went on to say though, that if I was still set on corrective surgery, that a toric implant in my right eye and LASIK in my left eye could be the way to go.

I wasn't really sure what to make of this. My rationale for seeing someone like this in the first place was that I wanted to make sure that I had the best possible advice before going ahead with something as drastic as eye surgery. They're my eyes, for heaven's sake. You don't want to be mucking about with your eyes, do you? I get reasonable correction with my glasses and with my contact lenses. As I've got older, I've found that it's become harder and harder to wear glasses as I have become less tolerant of the fit and they way that the lenses get dirty. It sounds stupid, but I hate it when I have to go out in the rain when I'm wearing my specs because I know that I will have to clean them off when I get into the dry. Sadly, I also seem unable to wear my contacts for much more than 12 hours at a time - less if I'm at work and using my VDU screen. It doesn't sound like much of a reason for undergoing surgery, I know, but without correction I am absolutely crippled. I can see nothing. This fact is never far from my mind, and my life revolves around always making sure that I have a spare pair of glasses or contacts to hand in case something happens. Not needing to do this would be revolutionary. Hell, just waking up in the night and being able to see would be amazing.

So today I went back to the professor to discuss with him how I might move this forwards - or to determine if I should just let this drop once and for all.

The upshot of the consultation? I'm not sure.

I think that on balance I want to go ahead with this.

LASIK is permanent. By its very definition, the procedure involves cutting away a certain amount of corneal tissue and is thus irreversible. It's a pretty reliable procedure, but the results are not completely predictable, and no one person who has this done heals in exactly the same way as any other. It's a quick process and basically only affects the surface of the eye. It's a pretty good procedure, but it's not foolproof and it's permanent. Once it's done, that's pretty much it.

An implant is an initially more invasive procedure: the eye is cut open to enable the insertion of a lens behind the cornea. The procedure can be done under local anesthetic, but it is often done under general and takes a few days longer to recover from than laser surgery. On the other hand though, this process has been used for cataract operations for many years and is well understood (the long term effects of laser surgery on the eyes are not really known). Because no tissue is being taken away, it is also a reversible process and the results are in many ways far more predictable than with laser correction.

The implant is also about twice the price of laser surgery, but luckily for me, price isn't something that I need to factor into this.

C. and I spent about 30 minutes grilling the professor with as many questions as we could think of as we attempted to explore all of the risks. How long does an implanted lens last? What's the procedure like? What are the chances of something going wrong?

The long and the short of it is that, although no surgical procedure is entirely without risk, my chances of this surgery going well are pretty good. In fact, the implant is probably a better option for me than LASIK in both of my eyes (if money isn't an issue, which fortunately for me it is not). The reason being that the results are likely to be both more predictable and more reliable (if I had LASIK in one eye and an implant in the other and something went wrong, then the difference between my eyes would be so great that I would be unable to wear glasses and would have to rely on contact lenses. This alone makes me think that it would be more sensible to have two implants).

It's still a pretty big decision though, and not one that I intend to rush.

...even though if I do get this done, then I could legitimately refer to myself as a cyborg.

What do you mean that's not a good enough reason?