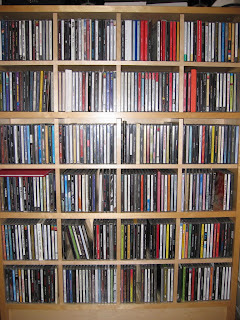 I have way more CDs than I know what to do with. Shelves and shelves and shelves of them. I also have them lying in piles near all of the stereos in the house, in the glove box of my car, in the boot of my car, piled on my desk at home waiting to be filed.... all over the place really. Quite a few of them have now been ripped onto my computer and loaded onto my iPod, and thought that's where I listen to a lot of my music, I still buy and listen to CDs.

It's not even that I'm that big on the physical product itself. I don't really pay much attention to the cover art (the only album cover on any of my walls at home is a big poster of Abbey Road), and hardly ever read any of the inserts either. To be honest, the only reason I don't download all of my music is that I don't really trust my computer enough not to have a backup copy (and yes, I do backup my laptop) and even though have an iPod connector in my car, I am still quite likely to take a CD with me to listen to.

Still, I've never said there was anything rational about it...

I must have spent thousands of pounds over the years. It's probably best not to think too much about it really.

It's not that I resent having these CDs - far from it. What gets me is there must be loads that I've hardly listened to. Perhaps some that I've never played more than once.

Why don't we find out?

I'm going to run through my CD collection one letter of the alphabet at a time, and I'm going to list all the CDs I find on my shelf. This isn't going to be an exhaustive list of all the CDs that I own because I'm only going to list the ones on the shelves. I reckon that if they're not on the shelf, then they're probably near a stereo or in the car, and I've probably listened to it in the recent past. I'm interested in the ones I haven't touched since I last moved house. What's their story? Should I listen to them or just get rid of them? What horrors lurk in there from my teenage years?

I'm going to beginning at the beginning.....

...which excludes both Arcade Fire albums, the last Arctic Monkeys album and the new Athlete album as they're all in the car.....

1. The Arctic Monkeys – Whatever People Say I Am, That’s What I’m Not

Well, hands up who hasn't got this one.

I dug this one out again the other day in a fit of nostalgia for "Them Bones", and I ripped it and put it on my iPod. It's a brilliant album. Still sounds as good today as it did when I was 17 when I bought it.

Another relic from my teenage metal years. I adored "Permanent Vacation", waited impatiently for "Pump" and then discovered that Aerosmith went back for years and had some pretty good stuff in their back catalogue too (I think I have "Toys in the Attic" on tape. By "Get a Grip", my love affair with them was over, and it was all songs about blowing up asteroids, fathering an elf maiden and nonsense like that from this point onwards. Having said that, I still wouldn't mind seeing them play live....

Brilliant band, and "New Wave" is probably one of my all-time favourite albums. As track 1, side 1s go, "showgirl" takes some beating in my books. I'm not so keen on the other albums, but that's partly because I can't get past how good the debut album was. They were bloody robbed by Suede in the Mercury Music prize that year. Robbed!

12. The Avalanches – Since I Left You

I couldn't name a single song they've done past "Frontier Psychiatrist", which like any sane person, I adore.

I've a Louis and Ella somewhere too. Genius, obviously.

Highly rated and much written about in the music press, so I went and bought it. My view? meh.

15. Anthrax – Attack of the Killer bs

It's an album of B-sides. Do you see what they did there. If memory serves me correctly, one great song and a whole lot of rubbish. I haven't listened to this since about 1988.

I think I bought the first album quite close to it's release, and I followed her for a little while and then lost interest. Not something I listen to a lot, but I do still like this stuff, especially "Little Earthquakes". I'm not sure where I heard about "Strange Little Girls", but I think I picked up this album of covers for £5 in Fopp... it's got some really odd choices on it: "Reign In Blood" by Slayer, "Happiness is a Warm Gun" by the Beatles, "Bonnie and Clyde'97" by Eminem... but it's bloody great.

Surprisingly dating back to about 2001, and not from my heavy metal years... but a classic, obviously.

I was mad keen to get this just before I left for a weekend in France, but I couldn't bloody find it anywhere. Listening to this now, apart from "Cochise", which I love, I can't really be bothered and just reckon they'd sound a lot better if they really were Rage Against the Machine.

"Sexy Boy" and some other songs. I'm sure this is very good though, and I really ought to get past the first track from time to time.

Another one I don't listen to much, but it's a superb record. Actually, does anyone listen to this all the time? Some albums I can't take off my stereo (Maximo Park's last record being a great example), but others are kind of nice to have once in a while. A bit like Calvados.

I bought 1977 on the day of release in HMV in York and got a free Ash frisbee. I bought the singles collection for the car and because I was too lazy to make my own. Good singles band, although I've not sat through a whole album for some time now (probably since "Meltdown" came out). Not bothered with the new one, interestingly.


God. This is going to take ages. There's bloody loads of "Bs" for starters.... including a bit of Bon Jovi.

I still want volunteers for the shuffleathon.