chase the bad things away.... 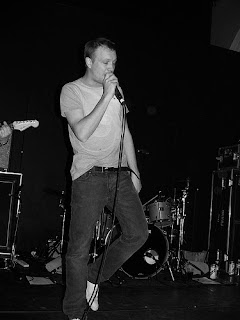 I knew the sum total of one song by The Twang going into this gig, and I only found out that it was them who sung it when I was watching some coverage of the 2007 Glastonbury Festival on the telly once I had got home and scrubbed the mud off. I don't think I even knew the band were playing at the Festival, so the question of whether or not I should slog my way down to the John Peel Stage never really came up in conversation, never mind being a serious option. Besides, John Fogerty's performance on the Jazz Stage that Saturday night was one of my festival highlights, so it's hard to feel too regretful about missing a band I'd barely heard of.

To be fair, they did look really good on the telly though, and "Either Way" really is a cracking song.

For once in my life then, I actually approached a gig with an almost completely open mind. I didn't know enough about the band to feel strongly one way or the other about them, and the one song of theirs that I have heard was pretty good, which had me leaning slightly to the positive.

It could still have gone either way, no crap joke intended. 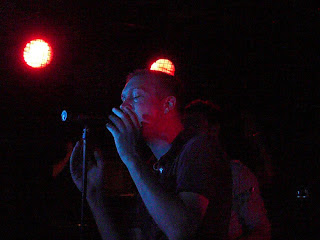 First the positive things: they played "Either Way" about two songs in, and it was magnificent. The crowd were probably surprised to hear it played so early, but greeted it like a long-lost friend and responded brilliantly. This song alone is easily worth two marks onto the gig review. It's tender and a little bit moving, whilst the voices of the two singers blend really well.

There is no more good stuff to report. If you like The Twang, then it's probably better to stop reading now.

The band were dreadful. If I was being charitable, I would say that they were handicapped by muddy sound, but the truth of the matter is that I'm not sure that crystal clear sound would have made any difference. A lot of the singing is really just pub karaoke bellowing, and as if to reinforce that impression, the co-vocalist appears to be a pissed bloke who could have been pulled straight out of the crowd and shouts into a microphone a bit on the choruses. "Either Way" and "Wide Awake" aside, the songs are all dreadfully dreary and instantly forgettable. I started with an open mind but as each song came and went, I could feel the review score tumbling.

The crowd loved it, of course.

Apparently the band used to be called "Neon Twang", but changed their name when they found they were unable to get bookings because of a reputation for crowd trouble. Well, the name has changed, but the crowd it seems remains the same. Like Oasis, The Twang clearly attract a certain sort of crowd: young(ish) men with gelled hair, white trainers and often wearing some kind of leisurewear and/or a raincoat. They drank large quantities of lager, carefully making sure that they left just enough liquid in the bottom of the plastic cup to hurl into the crowd in front of them with what looked like real venom. They danced as only people like this can dance: like drunken, spastic gibbons with puppet strings attached to their limbs. They stagger up and down on the spot in some kind of leering St. Vitus's dance, occasionally turning to their mates and pausing mid-bellow to raise a pointed, triumphal finger to the sky.

I generally say that a night out at a mediocre gig is better than a night in front of the telly. Not tonight. It was awful. "Wide Awake" prompted another flurry of beer raining down into the crowd, so I beat a hasty retreat to the exit, only actually leaving when the band came back on for an encore, said how shit encores were and then played a cover of "Drinking in LA". They may have played more, but we didn't stick around to find out what and slid out of a side door and into the street.

The music has no soul and it attracts the crowd it deserves.

Thanks as always to my gig-going companions, LB, Hen and Sarah. At least we got to have a pleasant meal beforehand, eh? Next time they're in town, let's just have the meal and another bottle of wine....
Posted by swisslet at 23:13