high upon the altar, high... 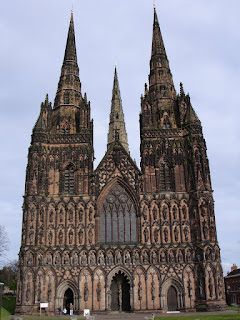 Nottingham is a pretty good place to live. It's a big enough city to have a wide variety of shops and bars and music venues, but it's small enough that a cab into the town centre costs less than a fiver. One of things that Nottingham does conspicuously lack though is monumental architecture. Partly this is down to the bombing the city endured during the Second World War, but it has to be said that a large part of it is also down to some lamentable town planning decisions (bulldoze the medieval centre of the town to install a concrete inner ring road? why not?). Every summer is marked by gaggles of disappointed tourists hanging around the castle desperately trying to imagine the Sheriff of Nottingham in a seventeenth century mansion house.

Perhaps I was spoiled by living in York for a few years, but I really miss having old buildings around me. I'm not in the least bit religious, but I find cathedrals in particular breathtaking. I love the way that they dominate the skyline of a town as they reach up to heaven, I love the way the interior feels, and I love the incredible details in the sculpture and in the stained glass windows.

So when we visited some friends in their new house in Lichfield, I jumped at the chance of a stroll up to the cathedral to work off our splendid lunch (it's the only English Cathedral with three spires, fact fans...) 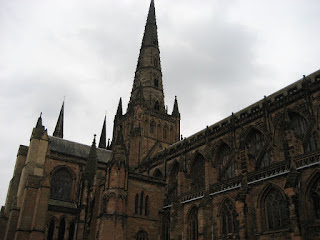 Much of the original church was damaged during the Civil War, and there is an unmistakeably modern feel about the restoration work, but it was still a very satisfying visit.... particularly as the choir were rehearsing for evensong, and those beautiful voices were softly raised up into the roof by the marvellous acoustics.

A very restful way to spend a few minutes on a Sunday afternoon. 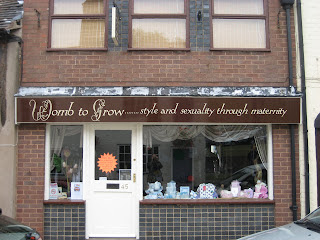 ...Now, in most towns you tend to get a lot of gift shoppes and tea rooms around cathedrals... and Lichfield has plenty of these, but it also has other shops....this one being my absolute favourite. What a brilliant business idea!

Sadly, it was shut.

Then it was back to Nottingham to watch Sean Lock at the Playhouse. He recycled a little bit too much material from "15 Stories High" for my liking, but he was still very funny. (Hm. I think I need to work on my stand-up comedy reviews. Perhaps another day, eh?)
Posted by swisslet at 19:53