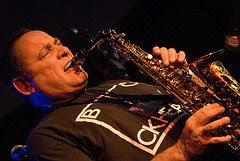 When I set out for Vienna last week, I was thinking that I would get to eat some cake, catch up with friends and perhaps take in a museum or two - I certainly had very little idea that I would spend an evening watching some improvisational jazz. Now, I like to think that my music taste is a pretty broad church, but when it really comes down to it, I like fairly simple guitar based rock music. I like lots of other stuff too, but really for me it's about the guitars. I'm not a big fan of classical music, and jazz is another one those genres that seems to make me feel instinctively nervous. It conjures up images of people with fussy little beards and funny little leather skull caps, all spouting pretentious rubbish about a honking saxophone. Add the word "improvisational" into the mix, and I'd usually already be halfway out of the door.

So how did I end up in a jazz club? Well, I actually spent a very pleasant evening in the Porgy & Bess jazz club the last time I was in Vienna. We sat at a little table and watched a rather good "world" music act and had drinks brought directly to our table. When my friend Peter asked if I fancied a night out there on this visit too, why on earth would I say no. We consulted the programme: Gilad Atzmon and the Oriental House Ensemble were playing. Okay, well, my knowledge of jazz isn't great, so I wasn't really expecting to be any the wiser. Peter translated the blurb for me. Improvisational jazz.... political... inspired by the politics of the german philosophers.... (do you think Nietzsche was really into free jazz? He doesn't really strike me as the sort). Ah, what the hell? Why not? So we went. We left the girls for a night in and hopped into Peter's rather cool 1978 Lancia and went to the club.

All the tables were reserved, so Peter and I took our places at the bar, ordered our Ottokringers and settled in for the evening. It's a lovely old building, with tables arranged in front of a reasonably sized stage with a bar running alongside. There are also tables (and another bar) arranged along a balcony overlooking the stage. There's lots of crushed velvet around the place, and it gives off the air of...er.... a European Jazz club. You are also still allowed to smoke in places like this in Austria (although thankfully not around where I was sitting), so you can still see smoke slowly tracking its way up a spotlight - which, as long as I can't smell it, is somehow entirely appropriate in a jazz club). Atzmon shuffled onto the stage with very little introduction and casually looked out into the crowd as his band (double-bass, keyboards, drums) joined him.

"It's great to be back in this room. It's probably the best place for Jazz in Vienna, if not in the whole of Europe. Those of you who saw me here last time probably remember me as a very political act. Well, I'm not political anymore. I'm too old and tired. Anyway. This song is called "Autumn in Baghdad"."

With that, he picked up his saxophone, and we were off.

Now, I don't claim to be an expert by any means, but this was clearly pretty good stuff. I don't know exactly how much improvisation around any one song the band were doing, but it was fascinating watching them play... at one point I saw the drummer select some drumsticks with big woolen ends on and then change his mind and replace them with a completely different set before he played his bit. Atzmon is no mean saxophone player either (he was wearing a Blockheads t-shirt tonight, and apparently he used to play with Ian Dury in the Blockheads, so I may even have seen him before). At one point he played a sax and a clarinet at the same time, which I imagine is really difficult, for all that he made it look very easy. The band played around with electronic effects too, Atzmon had two different microphones for his sax/clarinet, each with a slightly different effect, and he also had some kind of a board that enabled him to slide some weird electronic noises into the whole mix. Usually this was to pretty good effect, although just occasionally he would use it to make a jarring farting kind of noise, which when he did it, he would look over to the keyboard player like a naughty schoolboy before heading back to his microphone and some more saxophone. It was the kind of look that said "Did we get away with that one?". The audience, of course, were lapping it up. I looked around and you really have to laugh. I'm sure your average rock gig isn't much better, but there seems to be something about jazz that attracts a certain kind of person. The room was filled with people, mainly - but not exclusively - male, and often with beards and a tendency to nod or shake their head vigorously to the music. The "Jazz Club" sketch in the Fast Show skewers this brilliantly, and it's not very hard to see where they got their inspiration. The saving grace, though, is that the band did not seem to take themselves at all seriously. The drummer might have looked a touch autistic as he played (eyes tightly shut and head swaying), but I think he had an impish sense of humour. At one point the rest of the band left the stage to him to carry out a ten minute solo (seriously), and when they all filed back on, he kept his eyes tightly shut and pretended that he hadn't seen them, continuing on with his soloing. He didn't stop even when he dropped a drumstick, simply reaching for another and not dropping a single beat. It wasn't until the rest of the band started to chuckle at him that he finally dropped a grin and slipped back into the song for the rest of the band to seamlessly join in again.

It was also quite nice to watch an artist at work who clearly cares passionately about politics and the world and who tries to express himself in his music. Nothing as clumsy a political statement here as they almost always are in the world of pop - it was all a whole lot classier (although I read that he has kicked up quite a fuss with some of his more outspoken views, and has even been called a Jewish anti-semite). He played a song called "Burning Bush" that he assured us was about his first girlfriend, although I'm not so sure. He also played a fantastic, show-stopping number called "Liberating the American People" [YouTube], which he dedicated to all those Americans who travel (except to Iraq) as he's always found them to be wonderful, broad-minded people. It was a sentiment echoed in the band's encore of "That famous Palestinian" Louis Armstrong's "Wonderful World", which Atzmon telling us that in spite of everything he was still convinced it could be.

It was a really good night.... although when we returned to the flat from our evening at the jazz to discover that the girl's had spent their evening with Susi teaching C how to crochet, it did feel a bit like we had returned to the 1930s.