mondays is for drinking to the seldom seen kid... 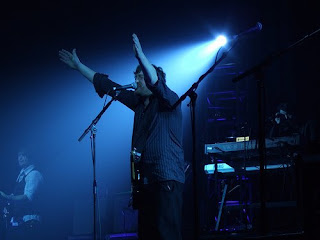 When I last saw Elbow, back in February 2006, I had this to say about them:

"They remind me a little of a non-stadium friendly Coldplay - with a better and more inventive lyricist. They're very downbeat and slightly melancholy, but they have a wonderful knack with a tune, and given the right moment, can be wonderfully uplifting. They deserve to be massive, but I would be very surprised if that ever really happens".

Their media profile seems to be a bit higher these days, but somehow they remain a band that it's difficult to see ever really becoming as big as they deserve. Perhaps they're too self-effacing, or perhaps it's simply because Guy Garvey isn't really very likely to marry a Hollywood A-lister any time soon (and even when he did go out with a sort of celebrity - Edith Bowman - it was all rather low key. And why on earth would you dump Garvey for someone like that lanky bloke from the Editors anyway? Yes, alright, he doesn't have a beard and a comfortable looking gut, but talentwise, there is simply no comparison).

Elbow are a pretty low key band who have released four beautifully crafted albums over the last seven or eight years. They're not exactly prolific, and sometimes their music isn't always immediate, but given time to breathe, each album is a gem in its own right. I thought it would be hard to top "Leaders of the Free World", their last effort and my favourite, but current album "The Seldom Seen Kid" is another marvel.

And the gig? Well, if I see a better gig this year, then I will truly be a happy man. Elbow were fantastic tonight. Just like last time, Rock City didn't quite look like a sell-out, and compared to some of the gigs that I've been too recently, the crowd was noticeably a bit older and hairier. No matter, I guess they're simply not the sort of band that the kids are really digging. Well, frankly that's the kids' loss. There were loads of things that made this a good gig, but it should be said right away that, first and foremost, Elbow are a sensational live band. They take to the stage with the band all holding trumpets and with a string section tucked away at the back and they launch straight into "Starlings" from the new album. They don't seem to be individually amazing musicians, and you hear the odd mistake from time to time, but somehow they are greater than the sum of their parts, and the end product sounds even better than the record. Deeper, richer... but above all more alive. It's not just that though that makes them great tonight: the band look as though they are having a good time themselves, which always helps, but they also very clearly want us to have a good time too. Guy Garvey's between song banter is fantastic. He starts off with a fairly standard "are you all okay?" at the end of every song, but before long he is bouncing off the shouts and whistles from the crowd like the old pro that he is. He winds us up skillfully for a few songs by telling us that we're good, but we're not singing and clapping as much as their shows in Sheffield and (of course) in Manchester, but when we get to the crowd singalong for "One Day Like This", he's got us good and fired up:

"So throw those curtains wide!
One day like this a year'd see me right"

We keep it going for a good five minutes at the end of the song, and it brings the house down. Rock City might not have been sold out, but I'll be damned if I see a bigger crowd in there as involved with a gig as we were tonight. I think Garvey knew it was special too: before the band launched into their final song, "Grace Under Pressure", he paused for a moment, handed his microphone to the guitarist and popped into the crowd. He came back a few minutes later with ten randomly plucked people who he wanted to join him onstage to help him to sing the song and generally join in. The crowd tonight were a big part of the show, and it was only fitting that it should end with some of them on the stage, dancing a touch awkwardly with an 18 stone bearded Mancunian.

They've got some fantastic songs though, and for the sheer sustained quality of their material, few other bands can touch them; they have songs that are powerful, touching and often beautiful; songs like "Puncture Repair", "Newborn", "Red", "Station Approach", "Leaders of the Free World", "Grounds for Divorce", "The Loneliness of a Tower Crane Driver".... Garvey is a deft lyricist and a fantastic singer, and he's been playing with this band for the last eighteen years. He jokes that it's been three years since they last played here and that all they've got to show for it is twelve new songs, but it's clear that this band is a labour of love and that really shows in the music and in the way in which the band respond to each other.

It was a really fantastic gig.

In a world in which bands like Razorlight, Kasabian and Babyshambles can play arenas and stadiums -- and good luck to them -- there's simply no justice in the world that a band as good as Elbow are still playing venues like Rock City. Selfishly though, as a fan, that works out just fine for me. World domination would be great, but seeing a band this good in a venue as small as this is good for me too. Garvey tells us that the band will be playing Glastonbury this year, and that's certainly a set that I don't want to miss, and if you're there, neither should you.

Go and see them. They really are that good.

Mind you, as I walked past the merchandise stand on the way out of Rock City, I did wonder just how many 'skinny' fit t-shirts Elbow sell in a year. That looks like a triumph of hope over experience to me.....

Incidentally, Mike's interview with guitarist Mark Potter is available here and is well worth a look.
Posted by swisslet at 23:43