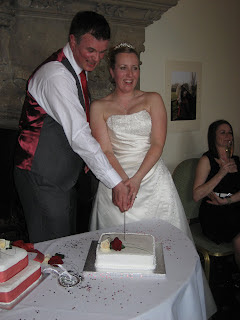 Congratulations to two of my very best friends, Keith and Tracey, who tied the knot on Friday afternoon. I first met Keith around 8 years ago when he came to interview for a room in the shared house that I used to live in. It was pretty much a formality, and over the years I don't think we ever turned anybody down, but for some reason, our landlady used to think that it was essential that we went through the hoops and had a formal meet up with prospective housemates. I remember the first message he left on the answering machine to arrange a time, as he sounded like the campest man alive - an impression that was only reinforced when he turned up on the doorstep wearing what can only be described as a pair of trainers that looked like ballet pumps. He seemed nice enough though, so in due course he moved in to the room at the very top of the house.

It was a brilliant decision - Keith is probably the most generous person that I know - and before long he was willingly doing every single task around the house: cleaning, washing up, ironing, charging up the electricity and gas cards.... it's also a real struggle to beat Keith to the bar to buy the first round, and he has been known to sneak away during meals to settle the bill before anyone else thinks to pay. He's a lovely man. Judging by the stream of young ladies who I met on the stairs on their way out in the morning, he certainly wasn't gay either...

Perhaps there was genius in our landlady's insistence on the interviews in that house, after all. I first moved in after I broke up with my last girlfriend in 1999 and was looking for somewhere to live in the classified section of the local newspaper. I ended up living there for about five years, and I only moved out when I moved into a little house with C. It was a really happy house and I made a lot of good friends there. In fact, I think it's fair to say that I'm still really close friends with almost everyone who passed through those rooms.

A couple of years after Keith moved in, my friend Kate's job moved to Birmingham, and the little room on the middle landing became available. As usual, the room went to the first person that we interviewed. In my interview, I had clinched my spot in the house by dint of the fact that I had a video recorder that would replace the one the departing housemate was taking with him. This time, all it took was the promise of plentiful supplies of biscuits (and the clinching statement that she disliked both M-People and Simply Red) and the blonde girl who was a production manager at a biscuit factory became a part of our lives. It was a promise that Tracey only came though on once, that I can remember, although we've done a bit better out of her since she started working at the Walkers crisps factory. She was a brilliant addition to the house though as she is the most fantastic value for money, whether that's sitting in front of the telly watching 'Eastenders' or out on the town after a couple of glasses of wine. On one occasion in the Nottingham Irish Club, a slightly tipsy Tracey flirted so outrageously with one guy that he started to respond, sending her running back to me. She threw her arms around my neck and told her now rather confused looking suitor that I was her, presumably very long-suffering, boyfriend. He apologised to me and made himself scarce, as Tracey tried not to choke on her barely stifled giggles. Bless her. She's vulnerable underneath her bluster though. She doesn't often let it show, but there's a definite softer side to Tracey, and maybe because of that, I love her to bits. She's like the little sister I never had. 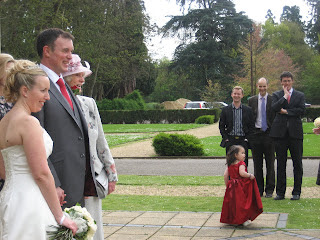 Shortly after I moved out of the house, at a get together shortly before Christmas, Keith and Tracey rather sheepishly revealed to us all that they were a couple. Perhaps they were worried about how we'd all react to this news, but to be honest we were all as pleased as punch and found the idea that they'd spent a few months creeping around the landings of the house after dark quite funny. A little while later, they moved out of the house and into rented place together, and shortly after that they bought a place of their own. Things were obviously going well for them, and although Tracey used to talk big about how Keith didn't want to get married as he'd been married before, we all realised that Keith knew he was onto a good thing and would marry her as soon as she was ready. As it turned out, she announced she was ready at the back end of last year and they set the date for May 2nd 2008 - last Friday.

It was a lovely day. The venue was lovely and the church next door was very small and pretty (even if I can't get my head around the fact that although the Vicar was happy to take their money in a commercial arrangement to carry out the marriage, he can still somehow insist as a condition that they turn up in his church twice a month for six months, even though he knows he will never see them again after the ceremony. What's the point? When the vicar announced during the ceremony that there would be a collection to provide for something the church lacked, we wondered what that might be. I thought 'a sense of humour', but LB reckoned 'proof'. I kept my wallet in my pocket.... ).

It was good though. We laughed, we ate well - not least C's delicious handmade and eventually tiered wedding cake), we danced and we drank (lots of) toasts to two of my very best friends on the occasion of their marriage.

Might I just say that I thought that the wedding photographer was fantastic. She was an understated presence throughout the day, and although we did have a few formal poses, I reckon that there are going to be plenty of fantastic shots of the happy couple and their guests enjoying the day.

Not that I'm biased or anything.... nosiree. 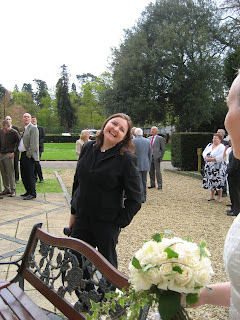 So, all in all, a really happy day, and hearty congratulations once again to the Bride and the Groom, who are now off in Cape Town enjoying their honeymoon, which will also see them enjoying a safari and a few days in Mauritius.

And yes, when we went down to reception on Saturday morning, we found that Keith had beaten us to it and had already paid for the room. Bloody man! 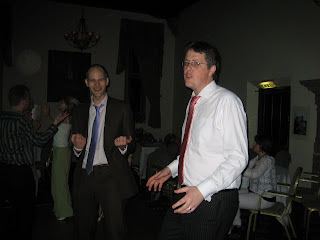 ...and perhaps I will just leave you with this rather striking image of two titans of the dancefloor strutting their stuff at the reception.
Posted by swisslet at 16:57