because you want the day to come sooner.... 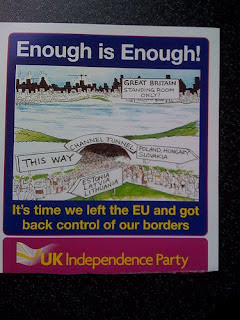 A plain white envelope was popped through my letterbox yesterday afternoon. As a Sunday, I obviously wasn't expecting any post, and I wandered over to see what had come through. I opened up the envelope to find a flyer from the UK Independence Party. The front featured a vile cartoon (as pictured above) of hordes of Eastern Europeans from places like the Baltic States, Poland, Hungary and Slovakia heading through the channel tunnel to a Britain already filled to bursting point. The back was filled with all kinds of interesting "facts" about these immigrant hordes: you know, unsubstantiated meaningless drivel along the lines of "1080 crimes in London were committed by Romanians last year".... as well as various ridiculous statements about how the health service was being stretched to breaking point by this uncontrolled invasion. I'd quote the stupid thing to you in its entirety, only in a fit of anger I ripped the damn thing up.

How dare they pop this racist garbage through my door? Hmm, but then again, perhaps it's better that they waste their money popping it through my door than posting it to someone who might read it and actually believe some of their self-serving lies. I may have wasted a couple of minutes by reading it, but at least I recognise it for what it is. Crime is no laughing matter, but I know that quoting one statistic about one nationality out of any kind of context is more meaningful for what it doesn't tell you than what it actually does; I know that without immigrant labour working as doctors, nurses, consultants, pharmacists and the rest of it, our health service would have fallen apart long ago. Most importantly of all, I think I know that judging someone because of where they may have come from is illogical, stupid and just plain wrong, and encouraging other people to do the same is even worse. I've said it before (about the BNP) and I'll no doubt say it again, but it is utterly, laughably absurd to be harking back to some pure breed Olde Englande that has simply never existed.

I read this bloody flyer popped through my door and it made me angry. Luckily, I saw that UKIP had seen fit to include a postage paid envelope. Not wanting to miss out on the opportunity to cost them another twenty-odd pence, I ripped up their flyer and scribbled them a quick note telling them to keep their ill-informed, racist crap to themselves and promptly posted it back to them.... although not before making a note of their freephone telephone number, which I reserve the right to ring at peak and off-peak periods for as long is it takes to make them go away.*

When I left the house about five minutes later to head to the postbox, I saw the pamphleteers just heading off the end of our road. Just as I got to the end of the street, I saw them disappearing into the (members only) Conservative Club.

Draw your own conclusions.

* I had a friend at University who spent hours ringing up the freephone numbers that were printed on the packaging of products from major international corporations like Coke and Nestle. He was endlessly creative, finding ways of keeping them on the line for another few minutes so that he could screw The Man by a few more pence every time. Brilliant. Power to the People!
Posted by swisslet at 20:56