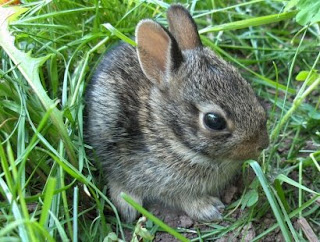 I know what the highway code says, but I'm afraid to say that if a bunny hops out in front of me on the road, and as long as my spidey senses tell me that it's okay to do so, I'm going to swerve. That's all there is to it. I've hit a rabbit on the road before, either when I had absolutely no time to react, or when it simply would have been insane or suicidal to try to steer around it. Every single time it's happened, even if there was nothing I could do about it and it was my life or the rabbit's, I still felt awful. I know it's only a bunny, and I know that it's stupid to risk your own life and the lives of others by recklessly swerving around the road, but if I can safely avoid a bunny and thus avoid having that horrible feeling again, I will. It makes a horrible noise, for one thing.

As it happens, the A46 was pretty quiet when Thumper flopped out in front of me on Friday night, so my evasive manouevres wouldn't have caused anyone any distress. He was very cute, but with a home that close to a busy dual-carriageway and with an apparent death-wish, I don't fancy his chances of a long happy life and a carrot filled retirement on Watership Down.... but at least I don't have his death on my conscience.

Speaking of Thumper, have I ever mentioned that I've never seen Bambi? It's one of a long line of films that everyone says that I should have seen that I simply have not seen. ET? nope. Ghost? pfff. Close Encounters? Hmmm, there's the Dreyfuss factor to consider there. Dumbo? Pinocchio? Fantasia? No, although I have seen the Fox and the Hound, and it made me cry like a baby. Grease? Well, I've seen Grease II starring Michelle Pfeiffer and Maxwell Caulfield, and I just plain don't believe that the original can be any better than that. How do you improve upon perfection?

Telling me I simply *must* see any of the above is more likely than not going to make me more determined *not* to watch it. And seriously, I really do have zero interest in watching ET.

I don't know about you, but I spent almost all of my weekend sat on a sofa drinking beer and watching golf.... at least 36 hours from Friday to Sunday. Even though Europe ultimately surrendered the Ryder Cup to the USA, it was still fantastic entertainment. I've been discussing this in a comments box with Cody over the weekend, but no matter how much I wanted Europe to win, there's not a shadow of doubt in my mind that the side that played the better golf won. I also think that after three European wins in a row, the last two with record margins, I think this is the right result for the future of the competition too. It was really good to finally see a US team playing as more than just a collection of individuals and showing some real fight and passion for the cause. Well done to the USA and roll on the 2010 match up at Celtic Manor. After watching him in the flesh at the K-Club in 2006, I was also really pleased that Jim Furyk took the winning point. He's played a lot of great golf in this competition, showed a lot of dignity and come away with absolutely nothing to show for it... until now. Good on him, I say, and well done the USA.

Europe to win next time though please....
Posted by swisslet at 18:27