I've been invited to go to a family wedding in a couple of weeks. It's on a Friday and in Bath, so it's more than a touch inconvenient, which is a bit annoying. Especially so given that I'm not close to any of the people involved, but when the invitations arrived, my father issued a three line whip and let it be known that my presence would be required.

My father doesn't have much family. He was an only child, and the only family connection of any sort that he still has is with his cousin - his mother's sister's daughter. I think I've mentioned this woman here before. How do I put this? In the nicest way possible, she's awful. The best example of this is when my dad decided to send her kids something different for Christmas. For years and years, with their christmas cards, my dad had sent each of his cousin's three kids a cheque for a few quid... nothing much, just a token fiver or tenner to show that he was thinking of them at Christmas. Now that the youngest of these kids was a strapping 25 year old, he decided that this was a bit daft, and decided instead to give them one of those charity gifts: he donated some cash to Oxfam and he gave them all "a latrine in Africa". Good idea, I thought, but apparently his cousin thought differently. She rang up on Christmas Day and she lectured my dad on how he was effectively taking the food from her children's mouths by giving them something as insulting as a gift to charity on their behalf. I couldn't quite believe my ears and still struggle to understand how she had the sheer brass to complain about something that she had absolutely no right to expect. She won though, because the following year my dad reverted to giving her kids a cheque instead. I would have given the ungrateful sods nothing, but my dad feels obligated to his cousin as pretty much her only surviving relative: her parents are both dead, her husband died a few years ago, and he feels a responsibility towards them that actually speaks highly of him and is far more than they deserve.

And so it is that my dad put his foot down and said that I was going to have to take a day off work and give up my time to go to this wedding in Bath. It's a family occasion and he expects me to be there. I can't help but think there's a subtext here, as I steadfastly did not invite any of them to my wedding last year. The seeds of this were sown back at my elder brother's wedding in 2004. I bumped into my dad's cousin when she and her mother were chatting to C. No sooner had I arrived, than she made a huge and completely pointless song and dance about how I hadn't formally introduced them to my lovely partner. Now, I always go out of my way to be polite to my relatives, no matter how tenuous the familial connection, just as I try to be polite to everyone...but I'm sorry, sending me a plastic belt for Christmas and a polyester tie for my birthday does not buy you the right to expect anything else from me at all. You have no say over how I run my life and you certainly not get to hector and chastise me over some pathetic imagined slight at an otherwise happy family occasion. It was no coincidence at all that when C and I got married last year, we only invited friends and immediate family: people who we wanted to be there to share our day with us. We did not issue obligation invitations to distant relatives who I otherwise had no connection or contact with. Getting married abroad probably helped, but I think that most people understood this....not everyone, I'm sure... but I think most people are capable and mature enough to understand that, first and foremost, a wedding is about the bride and groom and what they want. So we didn't invite by dad's cousin, we didn't invite her mother, and we didn't invite any of her children. They'd been invited (and attended) the weddings of both of my brothers, but I was damned if they were going to come to mine.

And so now I've been invited to the wedding of one of my second cousins, and I can't help imagine that the invitation is somehow a pointed one, as though they are demonstrating how magnanimous they are in overlooking my appalling snub of them from last year. This is doubtless my imagination, but my father does seem very keen that all of his side of the family make the effort to attend. Actually, I'm sure it won't be the end of the world. We've taken the time off and will attend the wedding and the reception on Friday, and we've also booked a nice hotel in the centre of Bath to make a weekend of it in what is, after all, a lovely town. If it makes my dad happy for me to be there, then ultimately I'll smile and put up with it.

Is it wrong of me to get all snobby about the wedding list though?

I don't know the exact history of the tradition, but I've always thought that wedding lists were originally a way of helping a young couple set up their first home together.... and they originated at a time when getting married meant that you would be leaving home for the first time. In that kind of context, you're going to need all the plates and gravy boats and things that you can lay your hands on, and gifts like that were probably most welcome. When C. and I got married last year, we'd already been a couple for the best part of 8 years, lived together for the best part of 7 years and we both had good jobs and earned a decent wage. We didn't really need anything. Yes, I suppose we could have wandered around John Lewis and put together a list of stuff we wanted, but we decided that we were simply more interested in having our friends share our day. If anyone really wanted to buy us a gift, then they could make a donation to a charity or "buy" some terribly worthy gifts from Oxfam - school books, fertiliser, goats, donkeys... that kind of thing (see how I avoid the use of the Oxfam's made-up word "funusual" in describing these gifts. My worthiness only goes so far).

In the event, we raised over £3000 for charity, which I was really very pleased about. Now, I don't expect everyone to have as high a WQ as we do, and I've got nothing in principle against couples having a wedding list - hell, it's a sensible way of making sure that you don't get 15 toasters from well meaning relatives - but looking down the bride and groom's wedding list for their big day, I couldn't help but shake my head in amazement. It was hosted by Debenhams for a start, which I know I shouldn't get all snooty about, but if I was going to have a wedding list held with someone, it wouldn't be with them... it also seemed to feature an awful lot of Vera Wang crockery. Well, perhaps they need a lot of crockery. Who am I to judge? I was a bit late to the list, so there wasn't a massive amount left on it, and perhaps all the really sensible stuff had already been snapped up, but one thing caught my eye immediately. To me, it was the kind of item that summed up the whole ridiculous and conspicuous expenditure associated with the modern wedding; it was the kind of item that can only ever be sold when couples are wandering around a big department store wondering what else they can add to their wedding list. I refuse to believe that any of these are sold to any other people for non-commercial use at any other time.

It was a Spiked Meat Dish. 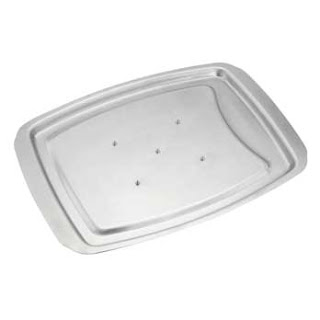 In the card that will accompany this gift, I have written that I hope they enjoy many happy roast dinners together, but if they use it more than once in their entire lives, then I will be astonished.

Perhaps it's something that they've always wanted, but I'm betting that it's far more likely that they only added it to their list because they were wandering around the store with a little handheld device wondering what else they could add to their list, and they scanned it on without really thinking about it, and probably without even considering that someone might buy it for them.

...Which, of course, is exactly why I did buy it for them.

Although, to be fair, it is fully dishwasher safe and comes "complete with protective covers for spikes", so it's really very practical.