A china rat and a bengal cat...

A real treat for you this week. You haven't got me spewing out my usual rubbish here. Far better than that, an old friend of mine has popped up and asked if he could have a go at earworms. Who am I to stand in the way of a polite and perfectly reasonable request like that? Especially not when it comes from a fellow sport lover who is also not averse to dressing up like a tit with his friends at the test match.... 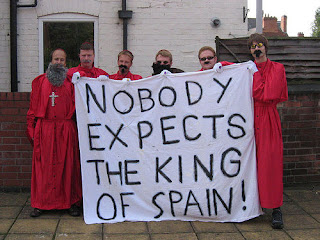 Ah, there he is....second on the right, standing next to me shortly before heading off to the Ashes test match at Trent Bridge in 2005. Now that was an excellent day.

Ladies and Gentleworms, without further ado, it is my great pleasure to introduce for your earworming pleasure....

It is a weird thing this, I have read Swiss’s blog almost from the outset, actually from the outset come to think of it. I’ve very rarely spoken to him about it and certainly never contributed, I have always found it a good tool for keeping in touch with a friend I rarely see. I feel a touch nosey and a little guilty too given the one way nature of the communication. So Swiss, firstly apologies and secondly thanks for the thoughts and insights over the years, although not convinced on the pieces about your cat. More on cricket and politics please.

Here is my first contribution and I will try and ensure it won’t be the last unless Swiss enforces it after reading what’s below.

I always preferred this version to Bob Dylan's, so quite happy this one is doing the circuits. I love the deep drawl of Hoyt Axton and this one always brings a smile to my face. Not sure what prompted it but I’m not complaining. He sings so effortlessly and in such a relaxed manner, it seems his voice was made for this song. I know I am not the first person to say this but I certainly think Bob Dylan’s songs are always done best by people other than Bob Dylan.

> My Uncle Used to Love Me But She Died, Roger Miller

The King of the Road man got very little of the praise he warranted in my opinion. Very much like Don Mclean, he became linked to one song and was never able to get anyone to pay attention to his other work despite writing some good stuff. The one hit almost became poisoned chalice.

This track is not good however and I think as a frustration to the lack of acknowledgment from the wider musical world, he decided to write this piece of musical stupidity. It is either that or he’d been on the pop. It’s catchy though.

I became a father 6 weeks ago and have been busily racking my brains for nursery rhymes and childrens' songs to try and sing to my son. It seems this one is the only one I really know and so is consequently sung most nights repetitively to the little one. I must learn some other songs quickly to relieve the boredom for me and for him.

I hated this from the off and knew as soon as I heard it, I knew it would give me headaches for weeks and it truly met expectations. It was the only thing that I hated about the Olympics and the only aspect of the Olympics I was glad to see the back off, that and Claire Balding. It has worn off, but it is still there, niggling away and now the Paralympics are kicking off with the same theme. It’ll be 2012 until the full effects wear off.

> Pub With No Beer, Dubliners

Two reasons this one figures, one is due to recent passing of Ronnie Drew that has seen me re-develop my taste for the Dubliners. The other is for somewhat comical reasons, the swinging, musical chair for the baby also plays it as part of its 5 song repertoire. I’m not sure it was ever used as a nursery rhyme tune, if it was I much prefer the version that has the verse,

There's a dog on the verandah, for his master he waits
But the boss is inside drinking wine with his mates
He hurries for cover and he cringes in fear
It's no place for a dog round a pub with no beer

I am already singing the lyrics to my son. Need to find a new musical chair quickly that does Humpty Dumpty or something.

Christy Moore is never far from my thoughts. I love his stories, his sense of humour and his voice. I spend a lot of time in Ireland and I am off again next week. There are few occasions when I do not have something from him swirling around and I am always pleased about it.

> A Case Of You, Diana Krall

A few years ago I had a heated debate with my cousin about this song and whether this version was better than the original by Joni Mitchell. I know Swiss is not a defender of Joni [ST's note: I like "river" though, and she was the original singer-songwriter], but I have always been in the camp that rates her as highly as any singer songwriter. My cousin had got it into her head that Diana Krall's version, was better, more soulful, more touching, sang with more emotion, simply better. At the time I was livid at the very thought that anyone could perform this better than Joni herself. As the years went past I started to change my tune. I listened to them side by side and came to the conclusion that actually my cousin was right. This hurts, not least because I do not like Krall and see her as overly commercialised and a little arrogant. Her version of 'A case of you' however is simply beautiful, I cannot argue. I have been thinking about it this week as I am seeing her at the weekend and have not told her about my change of tune. I won’t either. It is too painful to admit. She is good at gloating. [ST's note: I like the Joni version, as it goes....]

No one plays the piano like Abdullah Ibrahim and least no one that is living today. I have seen him a number of times, he does not speak (he doesn’t need to) he mostly plays solo and he is mesmerising. One of the times I went to see him he played two 45 min sets and in each he did not stop. He just moved seamlessly between compositions. He has a way of playing the piano with a subtlety and sensitivity that immediately tells you it is him when you hear. It is magnificently effortless.

This is one of those compositions that people know by sound but have no idea who wrote it or performed it. It became an important song during the latter years of apartheid in South Africa, being adopted as an anthem for the struggle. It is a true masterpiece and beats Mandela Day by Simple Minds by some distance in my opinion.

Sorry Swiss, not really the sort of avenues that Earworms tends to take, but you can’t control it, so they say. And should I have done 10? Not sure, but presume the nature of earworms means the number cannot be fixed.

Looking forward to more regular face to face contact with you in the Ashes year.

No - there's absolutely no requirement to have ten songs in your list... and you're absolutely bang on when you say that you simply can't help what pops into your head...Don't I just know it! What more proof do you need than this list for demonstrating that having someone else do this slot once in a while is a wonderful thing for diversity: it waters down the amount of indie pap and assorted other nonsense that otherwise appears when I'm in charge. This story made me laugh: apparently the music you like is linked to your personality type. Apparently, if you like indie, then you are likely to have "Low self-esteem, creative, not hard working, not gentle". If you like jazz, on the other hand, apparently you are "High self-esteem, creative, outgoing and at ease". Hmm... nice!

Anway, having a guest editor here certainly helps to keep things interesting for me. In fact, the arrival of Luke's list has saved that small part of the world that reads this from a rather alarming collection of earworms from me that included "Wired for Sound" by Cliff Richard (rollerskates on everyone! video filmed in Milton Keynes shopping centre! just up by John Lewis... check out those brown tiles! Still very much in place today! Oh-a-woah-a-woah-a-woh-oh-oh!).

Thanks Luke - I hope to catch up with you and to meet your new son in the very near future. I'm sure you've already started his nightly readings from Wisden....? And, of course, now that you've contributed here once, we can surely expect to see your thoughts around here a whole lot more often?

Anyway. It's a good, interesting, diverse list (can't go wrong with the Bare Necessities really, can you?) and you're more than welcome to hang around here as much as you like - silently or otherwise.

I've had a couple of requests from other people to do this slot, which I'll follow up as soon as I get around to it.... but if anyone else wants to have (another) go, then just drop me an email or leave me a comment and I'll get back to you. The more the merrier. It's all good to me.

Have a good weekend y'all.