My normal route to work involves taking an exit off the big Nottingham ring road and driving down to a complicated looking roundabout underneath the Dunkirk flyover. Well, it's not really very complicated, but it has a lot of roads sweeping away to various places above it on towering concrete pillars, and it looked so forbidding on a map that when I first moved to Nottingham I actually lived on the other side of town purely to avoid having to drive around it. Anyway, as soon as I released that it wasn't so bad really, I soon moved to the nicer side of town and decided it was probably best never to mention this marvellous piece of decision making to anyone. So keep it to yourselves, eh?

Anyway, as I trundled down the sliproad towards the roundabout and the start of my Monday morning in the office, I saw something interesting on the pillar directly in front of me at the traffic lights: some graffiti.... 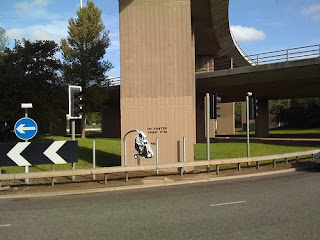 We've had people tagging down here before (this, for example), and if you look at that pillar carefully, you can see that the council have made it their business to put some sort of special paint on the bottom couple of metres so as to better deter vandals. It's been there unchallenged for a couple of years, but it looks as though it's only now that someone has decided to put this magic paint to the test.

It doesn't look as though it's up to the task. Even better, though, we look to have gained a quality piece of work too: 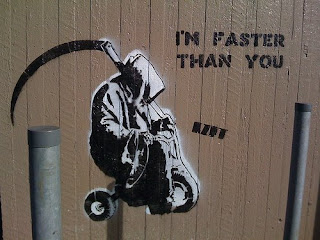 I suppose that the person who did this was actually committing a crime, but you can't tell me that this hasn't enhanced this dingy, damp, concrete filled piece of roadway. If Banksy has achieved anything, it's surely been to show to the world that street art like this can be so much more than just mindless vandalism.

"People say graffiti is ugly, irresponsible and childish... but that's only if it's done properly".
—Banksy

Banksy's work is widely celebrated, of course: it's funny, it's playful and it's also often bitingly satirical. Go and have a look at some of the stuff that Banksy painted in New Orleans during his recent trip there... there are some pretty powerful statements in there. He might not like to be called one, but he's a proper artist.

This isn't a Banksy, although it looks to be very much from the Banksy school of stencil art (as much as I know anything about it). I really like it, and I rushed to get a photo of it before the council come and efficiently (but humourlessly) paint over it. It's funny -- Death on a tricycle, what's not to like? -- but it's also as true a momento mori as you are likely to see, and it reminds me of "To His Coy Mistress" by Andrew Marvell. In the poem, Marvell hails the beauty of his love and tries to convince her that she should go to bed with him because life is short and death is never very far away. "Had we but world enough, and time," he says, then he would be more than happy to spend an eternity cataloguing her many virtues,

"But at my back I always hear
Time's winged chariot hurrying near;
And yonder all before us lie
Deserts of vast eternity".

So, he concludes, in what must be one of the most optimistic chat-up lines of all time, you should sleep with me immediately, just in case you should die before you get round to it:

"Thus, though we cannot make our sun
Stand still, yet we will make him run".

Or, to paraphrase: "Get your knickers off, love, and Carpe Diem"

Metaphysical poetry on a Monday. Too much.....?

Well, you can't outrun death, so you might as well enjoy the life you have.

It made me smile, anyway, and I need all the smiles I can get on a Monday morning.
Posted by swisslet at 18:27