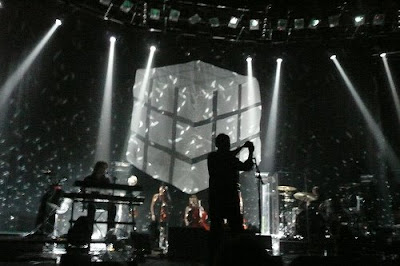 When I saw Elbow in February 2006, as they toured in support of their album "Leaders of the Free World", I had the following to say:

"They remind me a little of a non-stadium friendly Coldplay - with a better and more inventive lyricist. They're very downbeat and slightly melancholy, but they have a wonderful knack with a tune, and given the right moment, can be wonderfully uplifting. They deserve to be massive, but I would be very surprised if that ever really happens."

When I saw them again in April this year, touring the newly released "Seldom Seen Kid" album, I quoted that line again, adding that:

"Their media profile seems to be a bit higher these days, but somehow they remain a band that it's difficult to see ever really becoming as big as they deserve. Perhaps they're too self-effacing..."

Gloriously, I was wrong.

"The Seldom Seen Kid" ticked along nicely after its release, picking up fans slowly but surely as it gradually sank into popular consciousness. By the time Glastonbury rolled around, they were drawing a fairly substantial crowd to watch them performing against the glorious backdrop of the setting sun on the Other Stage. Another couple of months down the track and "One Day Like This" was already being more or less ubiquitously used to soundtrack montages for everything from the Big Brother finale to the BBC's coverage of the Beijing Olympics. And then, of course, at the beginning of September, Elbow were announced as the winners of the 2008 Mercury Music Prize. It wasn't exactly an unexpected win, but it was one that was rapturously received, not least by the band themselves, for whom it was recognition that had been some 18 years in coming.

Winning the prize has certainly raised the band's profile, that's for sure, and I'm pretty sure that the exposure has won them many new fans. It's all good, though, because Elbow are a magnificent band who have been producing some beautiful music, almost unnoticed, for more than a decade. Tonight's gig at De Montfort Hall is a triumphal one for them: the tickets sold out long before the Mercury Awards, and the audience tonight is thus mainly made up of people who have loved and cherished Elbow for a little while, and even those fans who arrived with "The Seldom Seen Kid" have had plenty of time to allow the album to seep slowly underneath their skin. It's a lovely venue in a surprisingly leafy part of Leicester, and is reminiscent of places like Blackpool Empress Ballroom and Wolverhampton Civic: it's a decent size and probably takes around three thousand people, but even when it's full, it's airy enough not to be claustrophobic and there's a comfortable amount of space on the floor too. We're not wedged in like Rock City sardines here. It's a mixed crowd too, and there seems to be a far higher percentage of ladies than there were at the Rock City gig in April. It seems that lovely, sensitive Guy Garvey has been working his charms on the fairer sex. If Sarah is anything to go by, they are putty in his hands before he's even opened his mouth.

If the Rock City gig saw the band showcasing their new album, tonight they have absolutely nothing to prove to anyone. This is a celebration, both for us and the band, and they very obviously enjoy flexing their musical muscles in a larger venue with lovely acoustics and a crowd that welcomes them with something approaching unconditional approval. Tonight they take their time over the songs, and they're not afraid to give up large portions of the set to some of their beautiful, but much more downbeat material. I suspect that the band know that their audience is about to change, and soon they will be playing much larger venues to people who know them for "Grounds for Divorce" and "One Day Like This", songs that are undeniably good, but are hardly representative of the band's back catalogue. Tonight, songs like "Great Expectations" and "Scattered Black and Whites" are greeted with a respectful hush. At Wembley Arena next year, I can't help but wonder if attention spans might begin to wander and we might see chatter. I hope not. They're lovely songs, and very few bands can convey such a broad emotional palate so effectively. They deserve to be cherished.

The band open with "Starlings", of course, and move on through a setlist with a hefty chunk of their newest songs. Before "Mirrorball", Guy asks if there are a Paul and Karen in the audience tonight. They're here, albeit right at the very back of the upper tier. Guy pauses and then tells Karen that Paul has something that he'd like to ask her during the song, and we'd be back later for an update. They play it, and it's a lovely, lovely song, and - surprise, surprise - it turns out that she said yes.

"Excellent. Congratulations. And now, to celebrate, here's a song about gut-wrenching heartbreak...."

And the band launch into "The Stops". Another shimmeringly beautiful song, but it's enough to make the hardest of hearts melt, not least because it's apparently about Guy's breakup with Edith Bowman. How big-hearted is the sentiment expressed in these lines:

I'm big and tough, of course, but even I'm finding my eyes welling up a touch as Guy's expressive voice reaches out to the stars. Aw. Lovely Guy.

They are quite simply superb tonight. "Leaders of the Free World", possibly my favourite Elbow song, is almost delivered with venom, as is that monumental guitar riff on "Grounds for Divorce". At the other end of the emotional spectrum, we sway gently and coo as the band play the likes of "Bones of You", "Loneliness of the Tower Crane Driver", "Newborn" and a great version of "Weather to Fly", that sees the band all clustered around "Craig's House" on the keyboard riser, where they share a round of Sambucca before Guy launches into that most delicate of refrains:

"Are we having the time of our lives?"

The only possible response from the crowd here is YES.

Over the years, I've seen a lot of frontmen, but I don't think I've yet seen one that has such an instinctive connection with his audience. Guy Garvey doesn't say very much to us tonight, certainly not as much as he said at Rock City in April, but he still exudes warmth and camaraderie, whether he is nodding his appreciation at the sombrero that is tossed onto the stage during "Mexican Standoff", or if he is gently waving his pointed fingers in the air in recognition of the man a few rows from the front who does this same gesture throughout the gig. It's a masterclass, and the band themselves are as tight as a drum and their 18 years together and the closeness of their friendships are there for all to see.

The band leave the stage with the crowd still singing the refrain to "One Day Like This", but they're soon back, and they treat us to an encore that gently brings us down. "We've haven't played a gig this good in years" are Guy Garvey's parting words to us as the band leave the stage for the last time. Perhaps he says that every night, but Elbow are a really special band, and they are absolutely at the top of the game.

As we leave the venue, we see Paul and Karen are lingering outside, walking hand-in-hand along the pathways in front of the main door - it's a special night for them, and I'm sure they never want it to end.

I think I know how they feel. 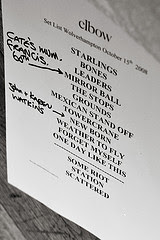 As usual, I didn't keep a track of the songs they played as I was far too busy watching the gig, but this is the setlist from their Wolverhampton gig on Wednesday night, and it looks pretty similar to me, although obviously we had Paul and Karen during Mirrorball and not Cate's mum.... but you get the general idea.

Thanks to Sarah for the lovely sandwiches she made me for my tea to eat in the car on the way down, and thanks to Mike for spotting the gig in the listings in April and suggesting that we buy tickets. A really special night.

Mike's interview with guitarist Mark Potter from March 2008 can be found here.

Earworms of the Week - Elbow Special.

...because it seems unfair to list anything else when I've had Elbow so much on my mind and playing on my internal jukebox. Apache Indian will just have to wait to next week, I'm afraid.

The song that introduced me to Elbow. Remember the days before YouTube and iPods and stuff? Yahoo or someone was hosting a streaming version of the song, and I gave it a listen. Not long afterwards, I went out and bought myself a copy of "Asleep in the Back", and my journey with the band was underway.

Not a long song, but a beautiful, redemptive little number.

"The cavalry with tea and sympathy"

Gorgeous sentiment. I hope everyone has their own puncture repair.

I think of "Bones of You" as being a close cousin to this song, with the repeated idea of being far away from the person that you love.

There's something about the way that he repeats the line "Somewhere in the dust bowl" that makes this song so hypnotic.

One of their early big-hitters from their first album. Bold first line for a love song, eh?

He's got a real knack of finding new ways of expressing his emotions, no?

> "The Loneliness of the Tower Crane Driver"

Tell me, how many other bands could write a song like this? One guy at De Montfort went absolutely ballistic when they played this. Mike wondered if perhaps he was a tower crane driver. Who knows? I bet there aren't many songs about them. I wonder if I'd react in the same way if they wrote a song about IT Consultants?

> "Leaders of the Free World"

Maybe I'm missing something, but this doesn't appear to be a bruised, emotionally taut love song.

"Passing the gun from father to feckless son"

The Bush era summarised in one pithy line.

> "The Stops" (another version here)

"We still believe in love so fuck you".

Have a good weekend, y'all. Stay classy.
Posted by swisslet at 00:33