I spent much of my Sunday sat quietly in front of an open fire working my way through the "Planet Hulk" and "World War Hulk" comics. The Hulk was one of Stan Lee's very first comic book creations, making his debut in 1962, six months after the Fantastic Four's first appearance in 1961, but fully six months before Spider-Man's arrival. Apparently he's been voted the 19th greatest comic character of all time (by Wizard magazine in 2008), but unlike Spider-Man, Daredevil, Wolverine, Batman and the like, I've never really been able to warm to him and have only really come across him in passing in the Marvel Universe.

Sure, I watched the tv show as a child (oops, with that haunting theme tune, there goes another earworm), and I loyally trooped off to the cinema to watch the first "Hulk" film (although not the second one - I wasn't going to make the same mistake twice). Ultimately, I just did not find the character very interesting.

The premise is fine: the Hulk is Jekyll and Hyde for the nuclear generation, and there is plenty of scope for both drama and melodrama in the constant struggle between man (Bruce Banner) and monster (the Hulk). Unfortunately, the heroes that I find the most interesting are also the most conflicted (Batman, Spider-Man, Wolverine, to name three); these are heroes who do not live in a world of black and white, and they face dilemmas with every decision they make and in the blurring of their private and professional identities. Although there is conflict at the very centre of the Hulk's existence, an internal conflict for supremacy between man and monster, the Hulk himself is ultimately very simple. His motives may be terribly misunderstood by the world in general, but essentially he gets angry and smashes stuff up. "Hulk smash". 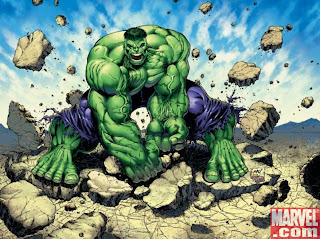 After working my way through the "Marvel Civil War" comics a little while ago, my interest was piqued in the "Planet Hulk" series when a number of other Marvel characters (Iron Man, Black Bolt, Dr.Strange and Reed Richards) trick the Hulk and blast him into outer space to take such an unpredictable creature entirely out of the conflict. Their intention was to send him to an idyllic world with no intelligent life, somewhere the Hulk could finally be alone with himself, which was all he ever said he wanted. Of course, something goes wrong, and the Hulk ends up on a violent planet where he is forced to become a gladiator, fighting first for his own survival and then for his own freedom and the freedom of the whole planet.

Yes, it does sound ridiculous when the plot's set out like that, but it's a comic for heaven's sake... Sheesh.

So when I was in town on Saturday, I popped into Page 45 and picked up copies of both "Planet Hulk" and the follow-up "World War Hulk", where the Hulk returns to Earth to wreak his revenge upon those who sent him into space. They're both pretty hefty volumes, but what are Sunday afternoons for if not browsing through a little light reading in front of the fire?

In my opinion, the most interesting superheroes are the ones that, as well as being conflicted, are the most vulnerable. For me, Superman is amongst the dullest heroes ever created simply because of the sheer extent of his powers. A character like Wolverine will always be a more interesting character simply because his powers are so much more limited and this forces the writers to be much more imaginative and makes battles with more powerful villains all the more interesting. Where "Planet Hulk" really works is in removing the Hulk entirely from the confines of Earth and placing him in a completely different environment. This frees the character up from so many of the constraints he usually labours under, and gives the writers freedom to explore. It is, however, a story that is fundamentally flawed by the sheer extent of the Hulk's power. It's reasonably well established that the Hulk's strength is proportional to the extent of his rage - it is, after all, anger that triggers Bruce banners transformation in the first place. In "Planet Hulk", the Hulk's rage is so immense that he ends up being able to swim in magma and walk in space without needing oxygen or a suit. Not only that, but throughout the entire story, he only transforms into Bruce Banner for brief moments, and never in a situation where it might be interesting or to put him in any real danger. In short, he is invulnerable. This is dull. The story is okay, but as there's never really any threat to our hero, I didn't find all that much to get excited about. The return to Earth and the Hulk's vengeance in "World War Hulk" are also rushed and confused, with a constant flow of characters from the wider Marvel Universe and a hurried and unsatisfying conclusion. The moral ambiguities here could have been interesting: were the illuminati right to act as they did? Were their actions really in service of the greater good? These are the kinds of issues that were dealt with extensively in the "Civil War" comics, which uses the comic medium to explore some of the issues raised by the real-life "War on Terror", but here they don't feel properly explored, and are buried beneath the rubble caused by the Hulk smashing up New York. 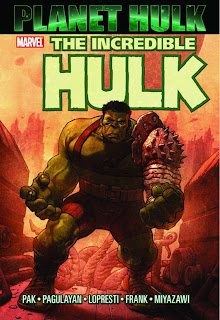 Perhaps it's been done to death in the past, but for me the Hulk will only be really interesting when they explore his vulnerabilities, not his strengths. Bruce Banner should not be subsumed within the Hulk, he should be at the very centre of the story, just as he was in the original TV series, forever unable to form meaningful bonds with people because of the monster inside him that he is unable to control. Even the Hulk himself should be about more than just smashing stuff up. He's complex and vulnerable too: a simple soul who is cruelly provoked and misunderstood by the world who only see him as a monster.

That theme tune is still playing in your head, isn't it?

"Planet Hulk" lacks these nuances, and, as a result, I found it ultimately unsatisfying. Hulk smashing just doesn't do it for me, I'm afraid.

... and with that, I'm going to flounce back to Anne Brontë and "The Tenant of Wildfell Hall".

Well, straight after reading "Ultimate Marvel Team Up", anyway.....
Posted by swisslet at 18:42