do you wanna make tea at the BBC?

Exactly fourteen days ago, I started growing a moustache in order to raise money and awareness for the Prostate Cancer Charity. Loads of people do it, apparently. It's called "Movember". I'd barely started when I updated you on my progress last week. How about after another week's careful cultivation? 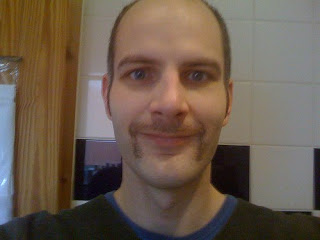 People who didn't know I was doing this are now coming up to me and asking what the hell I'm doing.... so it must be a touch more noticeable now. 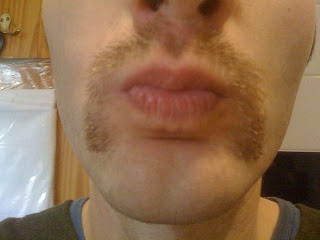 The charity says that, although the money raised is great, the best part of the event for them is that every single person taking part is a walking, talking advert for the charity. They reckon that every day, you will have to explain what you are doing and why to at least two people, thus spreading awareness of the issues and the charity. Did you know that 1 in 11 men will be personally affected the prostate cancer in their lifetime? That's a sobering statistic. 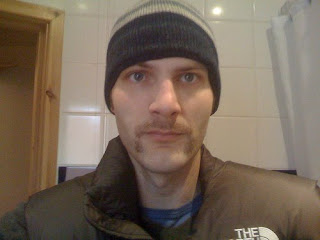 The nicest thing anyone has said to me is to ask me if I was growing a "David Boon". The next best was when someone asked me if I was trying for a "Lemmy". Other suggestions have included Brandon Flowers and Earl from "My Name is Earl". Me, I think that with a beanie on, I treading dangerously close to The Edge. 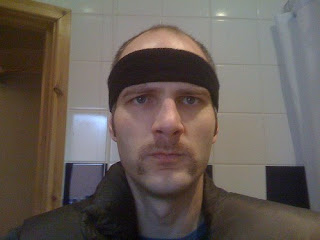 I've raised about £500 so far, which I should be able to get matched by my employers. I still want more though, so if you're so inclined, you can sponsor me here.

After that, how about some music?

> "Take Me Out" - Franz Ferdinand
It's now nearly five years old, but I heard this song the other day, and it sounds as fresh now as it did then. That change of pace at the beginning is sensational, and always a thrill to watch them doing live. They've got some new material on the way, so I imagine they'll be playing an enormodome near you in the new year.

For a long time, it looked as though Gary Lightbody's side-project might overshadow his day job. Luckily for him, "Run" and then "Chasing Cars" changed that for him, but there's something enduring about his collaboration with some familiar faces from the Scottish indie scene (members of Idlewild, Belle & Sebastian, Teenage Fanclub, Arab Strap, Mogwai, Mull Historical Society and so on appear on here). This song is very much Lightbody's, and as such is suitably sappy, but it's a good album all round really, and it's funny that listening to the new Snow Patrol album has inspired me to dig this nugget out of the archives.

I'm not entirely sure that I like Rachel Unthank. There's something about some of the delivery that grates with me slightly. It's not so much the Geordie accents (which I like), it's the "folk" style delivery and the occasional harsh, hectoring tone of some of the lyrics. On the whole though, it's a really good album. This song is an obvious standout, and is the one that I saw them playing on the Mercury Music show a few weeks back. Girl Power! Folk-stylee.....

Picked up via an advert for their forthcoming greatest hits. Amazingly enough, I used to actually quite like the Stereophonics... back in the day when they wrote good songs like "Local Boy in the Photograph".... I fell out with them at the time that they released a song ("Mr.Writer") that was nothing more than a rant at a journalist. It's pretty much been all downhill to middle-of-the-road plod-rock creative bankruptcy since then. With one exception: this song. "Dakota" is driven by an absolutely gloriously dry, driving riff that's as big as the sky. Quite where they dug this up from, I have no idea, but it remains as fresh now as it was when I first heard it and was astonished that it was by the Stereophonics. It's a frustrating song really, as it reminds me of how good a band they could have been, and quite how much they've settled for the easy money.

What with his work on Blur, Gorrillaz, Monkey Journey to the West and so on, Damon Albarn is clearly rocks' renaissance man. Mali Music was one of his earlier voyages away from the safe havens of Britpop, but it's a damn fine album. Where"Graceland" takes the African music and uses it as a backdrop for Paul Simon's own songs, here the local music is thrust to the forefront, with the western influences used more subtly underneath. It's a triumph. This song, perhaps a little unfortunately, has stuck in my head because the refrain sounds uncannily like "Fields of Gold" by Sting. To be honest, I'm desperately hoping that this particular earworm doesn't transform into a full-on Sting infection....

> "Salute Your Solution" - The Raconteurs

Because it rocks. The Bond theme is alright, I suppose (although it's definitely not all that), but it made me think how good a musician Jack White is. I love the way that this song just rollicks along from start to finish, driven by a nice big guitar riff.... just the way I like it.

> "No More Heroes" - The Stranglers

Elastica famously stole the intro riff from this song for "Waking up". Now, I really like that song too, but there's nothing that can quite match the fury of the original.

"Whatever happened to Leon Trotsky?
He got an ice pick that made his ears burn"

Cheggers is a great survivor, having come through a serious alcohol problem, the collapse of a high profile marriage and generally being thought of as a laughing stock. I like him. I think there's something heroic about his cheerfulness in the face of all this, and if he were to turn up on my doorstep first thing in the morning, it would surely be impossible to be cross with him. "Cheggers Plays Pop" may actually have been my first exposure to rock music, with it's guitar driven theme tune and gangs of children dressed in yellow and red high on sugar and additives charging around the face under the gaze of the serene and putti-like Chegwin. I think this came to mind when I caught a glimpse of Cheggers on GMTV as I was sat in the dentist's waiting room the other day. Legend. If I had to pick one of the Swap Shop gang to go to the pub with, I'd take Keith Chegwin over Sarah Greene or Noel Edmonds any day of the week (although, obviously I wouldn't be buying him a pint)

The Mighty Boosh Live were a massive disappointment last week, but I did learn that Noel Fielding does an excellent impression of the Kings of Leon. It involves a lot of mumbling, obviously.....

I haven't always loved the Clash. I was a bit too young to get into them first time around, and I somehow managed to serenely ignore them when they were back in fashion courtesy of that Levis advert.... even after I picked up a Greatest Hits album, I never really gave them an enormous amount of attention beyond "London Calling" and "Rock the Casbah". Over time, however, some of their other songs have crept under my skin. "Lost in a Supermarket", for example, is a brilliant record. I'd read that this album was finally the live album that a band of the stature of The Clash deserved, and it certainly doesn't disappoint. It was recorded when they were supporting The Who at Shea Stadium in New York, and from start ("London Calling") to finish ("I Fought the Law"), it's an exhilarating rip through some of their biggest hits. It turns out they were a damn good live band too. I wish I could have seen them. Just don't get me started on that Scouting for Girls cover of "London Calling" at the Olympics Party. Mike called that the musical lowlight of 2008 the other day, and I have to say that I agree with him wholeheartedly. Awful. How can you take something that edgy and that vital, with that much heart-on-sleeve righteous anger and turn it into something so...so.... bland. Rubbish. So, if you've got that travesty on your mind, you could do a lot worse than listen to the real thing delivered venomously on a rainy day in New York in 1982.

It's the Children in Need call centre for me tonight, so if you ring up to make a donation between 23:30 and 02:00, then you have a tiny chance of speaking to me in person.

That's gotta be worth a go, no?

Stay classy!
Posted by swisslet at 19:58