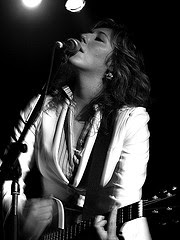 Australia: a wide brown land with a harsh environment inhabited by one of the toughest, no-nonsense races on the face of the planet. Hard competitors, but always quick to offer a smile and share a beer with the losers once the game is over. Good on ya mate. Julia and Angus Stone may be just the band we need to consign that ridiculous stereotype to the dustbin once and for all. You see, they hail from Sydney, but a wetter pair of siblings you would surely struggle to find. They're a walking, talking folk cliche, all singing with their eyes shut, bare footed, floaty dressed self-satisfaction. Quite how anyone can feel quite as pleased with themselves when they peddling some old rubbish about how they quite fancied the french horn player at band camp is frankly beyond me. Awful. Peppering your songs with "amusing" snippets from "The Lion Sleeps Tonight" or the "The Fast Food Song" fast food song just won't wash, I'm afraid. Not with me, anyway. Awful, although bizarrely well received by a barely half full Rock City - especially by the girl in the "Save the Whale" t-shirt...natch. Avoid. Unless half-baked, insipid folk is your thing, obviously.

I've never seen Rock City with tables on the main floor before, but as well as helping to make the place look fuller, it also kind of helps to conjure up a laid back ambience. It's not a big crowd tonight, but they're certainly keen to see Martha Wainwright, and she is given a really very warm welcome onto the stage. I've seen her live three times now, and I've enjoyed her shows very much, but I have yet to ever quite get round to buying any of her recorded output... which perhaps speaks volumes. She's usually a pretty personable performer, which is perhaps at odds with the intensity of some of her material, but she has a nice line in onstage banter and self-deprecation that goes down very nicely. Tonight she seems a touch ratty for some reason. An ill-judged comment that she wasn't wearing any underwear prompted some tedious but inevitable heckling and a couple of withering death stares, and she actually stopped a song a minute or so in to tell someone off for talking. She seemed to recover her poise as the show went on, and in the end was comfortable enough to share a joke with the audience when she asked us a question and the response was a shusshing noise:

"Oh, I see - I've scared you a little bit now..."
"I feel that way all the time" was the instant response from her bassist / husband, Brad Albetta.

Her band were good. As well as providing droll asides, her husband is no mean bassist, they have a good, unfussy drummer and I was especially impressed with the very serious looking guitarist - a man who clearly takes his job very seriously indeed, but who managed to back Martha's powerful and expressive voice with some equally expressive guitar.

By the time of the encore, Martha seemed to have warmed up good and proper, treating us to a smiling version of "Bloody Mother Fucking Asshole", the song she wrote for/about her father, a lovely song performed in French ("Dis Quand Reviendras Tu", I think, which she dedicated to her mother) and a rather chaotic version of Pink Floyd's "See Emily Play", with the bassist on drums, the guitarist on bass and the drummer - gleefully, like a rock god unleashed - on guitar. A great finish to a very pleasant evening. Underwear, she told us before leaving the stage for the final time, was onsale in the lobby, she was going to get some, and she advised us to do the same. By the time we walked past, the queue was several deep. I really must get round to buying some of her records....

...only Laura Marling to go on this week's folk odyssey then. I'll update the shuffleathon table when I get to the other side, if that's okay. I know there are a few people out there wondering if they're in or not. All will be revealed by Thursday....

(Incidentally, if this review - or the Fleet Foxes one, for that matter - is a little close to Mike's review for the post, then I can only apologise, and I promise I won't read his reviews just before writing my own again. Much. They're very good though, so....)
Posted by swisslet at 17:52