tell me anything you want, any old lie will do.... 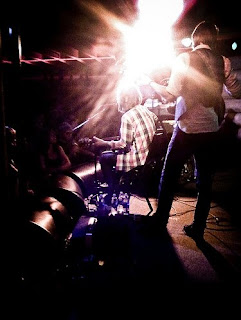 There's certainly no mistaking this venue as a Student Union building. Even if you had somehow managed to miss all of the signs above the door and all the students queuing to pick up their tickets from reception, you only have to get to the bar before it becomes inescapably obvious: they sell beer in two pint pots. Of course they do. Naturally, this news made the eyes of all of the bearded, middle-aged folkies attending tonight's gig light up as they simply had to have themselves a piece of that. Before long, the whole place was full of people clutching flower vase sized plastic pots full of weak beer and grinning inanely as they had their photo taken by their colleagues.

It's understandable, given the venue, that support act J.Tillman should assume that this was a gig entirely attended by students, but one glance into the audience should have disabused him of that particular notion and saved him the trouble of asking a bunch of people whose university days are decades in the past how they were enjoying their courses. Still, he was amiable enough and managed to overcome the general hubub of conversation enough to convey his Ray La Montagne-alike one-man-and-his-guitar-and-his-troubled-soul schtick. He had a good singing voice and overall I rather liked him, although I felt he was better when the Fleet Foxes appeared onstage to provide him with a full band backing for a couple of songs. I was a touch confused when he said that they were a lot better looking when viewed from the front rather than the back, but all became clear when he came back onstage with the main act as their drummer. Ah.

Of course, when - like the Fleet Foxes - you are a band who rely upon beautiful, intricate, multi-layered vocal harmonies, then it makes perfect sense to have a drummer who can hold a tune as well as a beat (the guitarist is the only member of the five piece band who doesn't sing).

The Fleet Foxes debut album is one of my favourite records of this year. I love the Brueghel cover and I love their unique sounding baroque pop. Some of their songs - "White Winter Hymnal" in particular - sound like nothing so much as medieval roundels. They're from Seattle, but their lyrical content is resolutely pastoral, talking about mountains and squirrels and meadows and songbirds. I had been very much looking forward to seeing the band live, but did wonder how they would be able to reproduce some of the delicate vocal acrobatics of the record onstage. Well, even though most of the band were labouring with colds and heavily dosed up on various cold medications, but those harmonies were all breathlessly intact. They weren't delicate either, and were delivered with real gusto by a surprisingly muscular live band, driven by singer Robin Pecknold's acoustic guitar almost as much as by his astonishing singing voice. 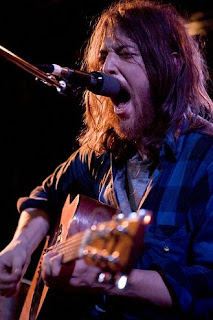 They look more or less the way that you'd expect, to be honest, wandering onstage dressed in a selection of tatty looking knitwear, and Pecknold sports long, bedraggled hair and a splendidly raggedy beard. I'd say he looked like the archetypal hippy, but I think you could actually move centuries further back than that and place him as a medieval troubadour, which is fitting with the band's overall sound. Musically it would be fairly easy to pinpoint the overall influences of the band as broadly being in the Laurel Canyon of the late 1960s, with all those singer-songwriters with their acoustic guitars and Crosby, Stills, Nash and Young in particular.... although they still manage to have a sound all of their own. There are other influences in there too, from the harmonies of the Beach Boys, the twang of country & western and even through to the bowed electric guitar of the Velvet Underground. It's hard to get past their singing though, and the intertwining of the voices of the four singers is both beautiful and mesmerising, with a range that frequently beggars belief.

They were fantastic. Their onstage banter was amiable and enthusiastic if a touch directionless, I thought (we had one long roundtable session as the band discussed the price of oil and they all cheerfully suggested that they would be voting for McCain - "if it ain't broke....!") but overall, they were extremely good value indeed. "White Winter Hymnal" is my favourite song on the album, and they delivered it well here, but if anything it was eclipsed by other songs like "Sun it Rises", "Ragged Wood", "Your Protector", "Blue Ridge Mountains" and a scintillating version of "Oliver James".

Excellent band and a superb show. Martha Wainwright (tonight) and Laura Marling (Tuesday) have got quite a lot to live up to now.

... I could have done without the fat geordie singing in my ear all night though. He had a good voice, but....
Posted by swisslet at 17:48