the revolution is just a t-shirt away.... 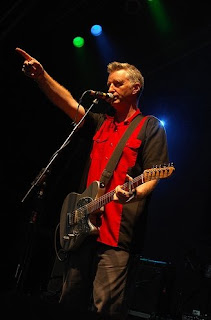 Billy Bragg got his first significant piece of national radio airplay in 1983 when he heard John Peel say on the air that he was hungry. Bragg rushed around to the studios with a mushroom biryani and was rewarded when Peel played a song from his "Life's A Riot With Spy Vs Spy" LP.... although typically Peel played it at the wrong speed, and later claimed (when he played it at the correct speed) that he would have played the record anyway, with or without the biryani.

Apart from being a great piece of opportunism, I reckon that story says an awful lot about Billy Bragg as a fundamentally pretty decent bloke (apart from anything else, he knew that Peel was a vegetarian). Because of his campaigning on various (left-wing) political issues, lots of people have probably got a preconception of Billy Bragg as a bit of a big-mouthed, big-nosed idiot. He first got into music and politics properly when he saw the Clash playing Rock against Racism when he was a teenager, and since then he has been involved with lots of political movements and causes, most famously with Red Wedge and the striking miners, but Bragg has also been involved in many other causes: the brilliant Jail Guitar Doors, active campaigning against the BNP in his South London heartlands, fronting a campaign to try to coordinate tactical voting in the UK General election to try and keep the Tories out, all the way through to visits to the Soviet Union in the wake of Gorbachev's policies of Perestroika and Glasnost.

I suppose it goes without saying that he's recorded versions of "The Internationale", "There Is Power In a Union" and "The Red Flag"......

He'd probably be the first person to tell you that he is indeed a big-nosed idiot, but I think he's brilliant. I only discovered him in about 1987 when a friend of mine introduced me to his early albums in the days when they still had big stickers on them saying "pay no more than five pounds for this record". At the time it was mainly just him and his guitar, singing songs that were as often about love as they were about politics. Nowadays he usually plays with a band, and live he's as much a raconteur and a stand-up comedian as he is a musician. I always make the effort to see him performing in his traditional Sunday night slot in the Leftfield (of course) at Glastonbury, and sometimes he just turns up with a blank piece of paper and takes requests.

Tonight, or so the Rock City answerphone message tells me, Billy will be onstage at 9 and that there's a strict 10pm curfew. Hmm. That doesn't sound good. Luckily, it's cobblers and we get a full 2 hours of just him and his guitar. This is old school Billy Bragg. His latest album, Mr Love & Justice, released earlier this year, was recorded with a band but included a bonus disc of all of the songs done solo... and in my opinion that's how it sounds best. He starts a bit slowly, and we have a small pause in proceedings as he arranges to have some paralytically drunken kids thrown out from the front where they are disturbing everyone around them, but soon he's on top form: drinking cups of "Throat Coat" tea, talking to us on a range of topics from the BNP (Nick Griffin apparently tried to use the leaked membership lists as proof of the "diversity" of his party), Barack Obama's election and how John Sergeant's success on Strictly Come Dancing showed Gordon Brown that sometimes people will vote for a fat, clumsy oaf. Oh, and occasionally he played us some songs too. It was a mix of old and new, with songs like "I Keep Faith" and "O Freedom" mixed in with a bit of Woody Guthrie (scarily relevant in the credit-crunch era, a full 70 years after they were originally written) and a lot of the really old-school stuff like "The Milkman of Human Kindness", "Sexuality", "Waiting for the Great Leap Forwards", "To Have and to Have Not", "Levi Stubbs' Tears" and (of course) "New England".

How many performers are there left like Billy Bragg? Someone who can appear onstage with just his guitar, his opinions and a few of his songs? He may be on his own, but he's one of the most accomplished performers I have seen at engaging with the crowd. He's opinionated, of course, but you get the impression that he's actually thought about what he's saying and wants to share it with us. He chastised people who want to "throw piss" over the hope generated by Obama's election in the USA and suggested that although he is going to disappoint us over some things, at the moment he represents possibility above everything else and we should embrace that. The last time he played Rock City, he told us, was the night before the General Election in 1997, when the Labour party finally swept the hated Tory regime aside. No matter how much we felt that the Labour Government had let us down (I doubt all that many tories attend Bragg gigs), we had to gear ourselves up for another election next year because a Labour government still represents possibilities that we would not have if the Conservatives get back into power. You don't get this kind of stuff from Oasis, do you?

He's fully aware that he's not everyone's cup of tea, and his t-shirts for this tour (this is the first night, and he proudly wore one himself onstage) consist of an adapted Marmite logo. Billy Bragg: love him or hate him, he's not going away any time soon. Nor would anyone in Rock City this evening have it any other way. Carried away by the excitement of the night, Bragg's voice cracks towards the end, but he's never been much of a singer anyway, and the one man format encourages the crowd to help carry the load anyway. By the time we get to "New England", he really needn't bother singing a note as we carry him, the song and the gig over the finish line. There's nobody else quite like Billy Bragg, and I fully intend to make the most of him whilst he's still around and still performing.

A friend told me the other day that he had managed to get the great man's signature on the only piece of paper he had at the time - a one pound note. What could be more appropriate and more time-boxed than that? I asked him if he still had it, and if he'd had it framed or anything. His sheepish response? That he was a student at the time, so obviously at some point or other he had spent this priceless item on beer. Dear oh dear. The man's a legend and surely deserves better treatment than that? Or perhaps that's exactly the way he would have wanted it....redistribution of the wealth and all that.

It was great to see him again, and it was also great to see him with the man who first introduced me to his music some 21 years ago standing by my side. I was also pleased to be able to get Sarah a "Brewing Up With Billy Bragg" tea mug for her birthday.

An excellent evening. More power to him. And to the Unions, obviously.