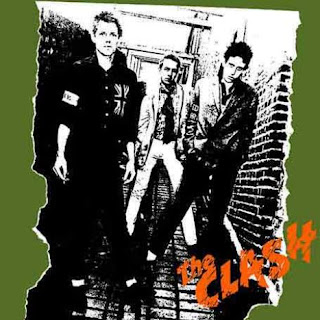 I've been listening to The Clash a lot recently and they seem to have been following me around a bit. A few weeks ago I bought the recently remastered and re-released album of their 1982 Shea Stadium gig. It dates from an era when Topper Headon had already left the band and disintegration wasn't very far away. It sounds fantastic through and I found myself rediscovering a band I haven't listened to in quite some little while. A few weeks later, Billy Bragg mentioned at his Rock City gig how it was the appearance of The Clash at "Rock Against Racism" that inspired him into mixing politics and music. Finally, as I was battling a mild case of jetlag the other day, I stumbled across a late night screening of the Julien Temple documentary "Joe Strummer: The Future is Unwritten". There's a bit of footage right at the beginning of the film that shows Strummer singing "White Riot" unaccompanied into the microphone in a studio. It's a brilliant piece of footage, and although Temple later intercuts the full band version of the song, it's Strummer singing alone that lingers in the memory.

Billy Bragg always finishes his gigs at the Leftfield stage at Glastonbury by singing a version of "Garage Land" with the union guys who organise the stage. His charity that distributes musical instruments to prisoners is called "Jail Guitar Doors" - both are songs on the debut album by The Clash. As is "Janie Jones", hailed in "High Fidelity" as being number one in the all time top five track one side ones of all time. As are "White Riot", "Remote Control", "London's Burning", "Career Opportunities"..... it's a pretty damn good album. Why did I not own it? This evening, I popped across to iTunes to download it. A quick search, a click on the "buy album" button, and we were done.

After I had downloaded the album and shifted it onto my iPod, I noticed that "Janie Jones", number one in the all time top five track one side ones of all time was apparently track 9. Hmmm. Maybe they'd just got the tracks jumbled up? Annoying but not fatal. I set about rearranging the album. I soon ran into problems: let's see..... according to iTunes, track one of this album was "Clash City Rockers"... which is odd, as it's not on the album at all as it was originally recorded. But then, neither was "Complete Control" or "(White Man) In Hammersmith Palais", and both of them had appeared in the download too. I double-checked to make sure that I hadn't downloaded the wrong thing by mistake. Nope. Right album. Same name, same album cover.... and yet wrong tracks.

I'll be getting that £5.99 back off them then (after some fiddly and no doubt drawn out process that involved submitting a report via my iTunes profile. *sigh*). I could have bloody bought this album for less than that by going to Amazon, but I'd paid a bit extra because I wanted it right now. Surely it's not too much to ask that they get the bloody thing right? After all, it's only one of the most famous albums in rock history.....

Tsk. Downloads - they're the future, you know.

Good band though. If you're getting my shuffleathon, you have been warned....
Posted by swisslet at 22:08