one hundred hairs make a man.... 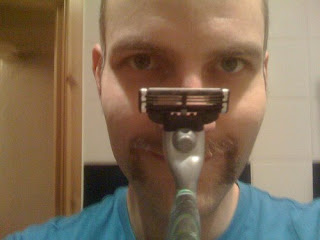 These are bittersweet times indeed. After thirty days of careful, tender cultivation, my moustache only has a few hours left to live. It feels as though we've been through a lot together, and when midnight strikes tonight and I set to work with my razor, it will I think be something of a sad moment.

I suspect I will carry the sense of loss with me for some time to come. 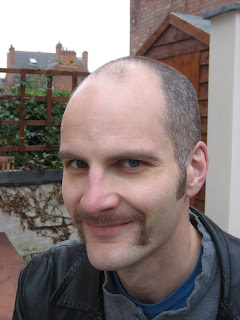 do not approach this man....

Oh, who am I trying to fool? I can't wait to be rid of the damn thing. Far from being lovingly nurtured, this wretched bovril smudge has simply sprouted on my upper lip for thirty days, become more bushy and irritating with every passing moment. As I reached for the scissors to trim the wiry little buggers that were reaching down into my mouth, I couldn't help but think that this was surely almost as undignified an activity as dealing with those other rougue hairs that sprout from your nose and ears as you lurch uncontrollably into middle age. Is this another symptom of encroaching age? Is it a midlife crisis moustache?

People look at you differently too. It had seemed funny, right back at the beginning of the month, to go for a handlebar-style effort, with the ends extending past the side of my mouth. If you're going to grow a moustache, I thought, then you might as well go the whole hog. I'll stand by that logic, I think, but as it began to take shape, I could feel people staring. It's okay when they ask, as of course I'm all ready with the explanation.... but lots of people don't ask for fear of offending. It's the people who don't ask that you have to worry about; they're the ones who are no doubt thinking that this is some kind of a lifestyle statement. I think the waiters in that restaurant in Hell's Kitchen were particularly taken with it. 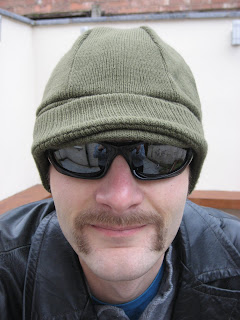 Ah, but what the hell. Although I can't wait to get rid of the damn thing (particularly as I have now developed the habit of stroking it in meetings), it has to be said that this has actually been quite a lot of fun. I've struck up conversations with all sorts of people who have asked me what it's all about, I've had smiles from perfect strangers in the street, given my friends and family a good laugh and above all - of course - I have raised more than £750 to go to the Prostate Cancer Charity. As well as the money, I hope that I've helped increase the awareness of a nasty disease that will affect 1 in 11 men in their lifetime.

Thanks very much to everyone who made a contribution - you've been remarkably generous. If you still want to throw some money into the pot, then you can still sponsor me.....just click here.

So it's been fun, and it's been worthwhile..... but it's still coming off at the first possible opportunity after midnight and I can't wait for it to be gone. Neither, it has to be said, can my wife.
Posted by swisslet at 17:44

Email ThisBlogThis!Share to TwitterShare to FacebookShare to Pinterest
Labels: movember