I don't have any reasons, I've left them far behind.... 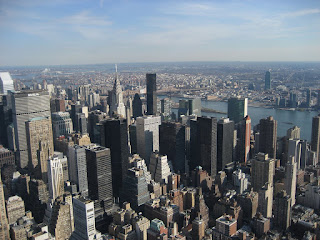 One last post before I close the book on our stay in New York. Anyone who has been to the city will know how familiar parts of it look thanks to their appearance in countless films and TV shows. I find that the city gets any number of songs playing in my head, whether it be from the names of the streets that I'm walking down, the cops on the street corner, the letter of the subway train I'm travelling on, or whatever.....

I'm not looking to write an exhaustive list of songs about New York, I'm simply listing the songs that got looped on my internal jukebox at one time or another during our stay. And before you ask, it's a little too early for the Pogues, and I've never really been much of a Sinatra fan....

"Eleanor put those boots back on
Kick the heels into the Brooklyn dirt
I know it isn't dignified to run
But if you run, you can run to the Coney Island rollercoaster
Ride to the highest point and leap across the filthy water
Leap until the Gulf Stream's brought you down"

"Slow down, you movin' too fast
You gotta make the moment last
Just kickin' down the cobblestones
Lookin' for fun and
Feelin' groovy" 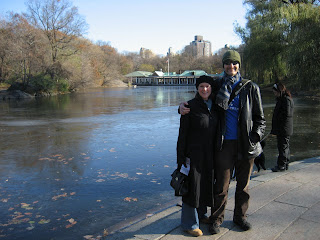 "Well, kill me now, if I let you down
I swear it one day we're gonna leave this town
Stop----
Yes I'm leavin'
'Cause it just won't work
They act like Romans
But they dress like Turks
Sometime, in your prime
See me, I like the summertime
but, hey!"

"San Francisco’s calling us, the Giants and Mets will play
Piazza, New York catcher, are you straight or are you gay?
We hung about the stadium, we’ve got no place to stay
We hung about the tenderloin and tenderly you tell
About the saddest book you ever read
It always makes you cry
The statue’s crying too and well he may."

A song inspired by New York and one that was massively popular in the city.

"What do we have for entertainment?
Cops kickin' Gypsies on the pavement
Now the news - snap to attention!
The lunar landing of the dentist convention
Italian mobster shoots a lobster
Seafood restaurant gets out of hand
A car in the fridge
Or a fridge in the car?
Like cowboys do - in T.V. land"

> "I'm Waiting for my Man" - The Velvet Underground

"Some folks like to get away, take a holiday from the neighborhood
Hop a flight to Miami Beach or Hollywood.
I'm taking a Greyhound on the Hudson river line.
I'm in a New York state of mind."

Have a good weekend y'all and stay classy.

Moustache update on Sunday....
Posted by swisslet at 20:50