are you happy inside your eyes? 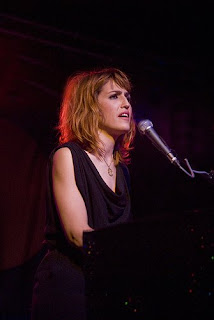 I mentioned in a meeting this afternoon that I was going to a gig this evening.
"Oh yes," said my colleague, "Who are you going to see?"
"Joan Wasser"
"Who?"
"Joan Wasser"
"Never heard of her. What kind of music is it?"
I paused for a moment and thought. "Torch songs"
"I've no idea what that even means."

...and then our meeting began.

I'm sure she's sick and tired of hearing people talking about it, but in spite of her wonderful solo records and her work with the likes of Rufus Wainwright, Scissor Sisters and Antony and the Johnsons, Wasser will probably always be remembered by most people as Jeff Buckley's girlfriend. They started going out shortly before "Grace" was released in 1994, and they remained together until Buckley's tragic death in 1997. The song "Everybody Here Wants You" was apparently written about her.

That's a lot to live with.

Luckily, Wasser is a very talented woman and is more than capable of escaping the shadow of her dead lover to carve a career all of her own. The slightly odd band name comes from the 1970s American TV show Police Woman, in which Angie Dickinson played a cop in her 30s who was tough and glamorous. As Wasser's own name was initially more well known for her work with the classical violin, she adopted a slightly tongue-in-cheek name and it stuck. She first caught my eye supporting Rufus Wainwright in 2005, spellbinding the crowd at the Royal Concert Hall standing slightly awkwardly and alone in the middle of the huge stage with her delicate songs. I was then a touch surprised to see the support act come out as part of Wainwright's own band, but much though I thought Rufus was good, it was Wasser who I looked up the next day and I purchased her album as soon as it was released. I can't say that album has been top of my listening pile, but it's a lovely record filled with meditations on heartache, desire and loneliness. Quite why I haven't got round to buying the follow up is beyond me.

It's a decent crowd at the Rescue Rooms: not full, but certainly more than for Tina Dico the other day, although it's hard to ignore the fact that almost everyone present is in their thirties at least. Wasser seems all too aware of her demographic, and upon being greeted by a deafening silence when she asks during the show if anyone present is still at college, she ruefully shakes her head and says "I guessed not". The show gets off to an inauspicious (false) start when Joan's keyboard gets stuck on reverb and requires a few re-boots before we're able to begin in earnest. The first few songs all feature Wasser on piano, backed by a bassist and a drummer, and the set resolutely fails to take off. Wasser herself is engaging, but seems shy and a touch self-conscious, although her wry self-deprecation quickly shakes off the impression sometimes given by her songs and her album covers that she might somehow be austere.

The show only really begins to take off when she steps out from behind her keyboard and straps on a guitar. At this point, the songs become more forceful and the sound of the band louder, and we are able to see Wasser's songs highlighted against the backdrop of her agile guitar playing, which occasionally encompasses the odd surprising solo. I'm captivated, but there's no getting away from the fact that she now sounds unmistakeably like the early Jeff Buckley, as caught on the Live at Sin-é album, all strumming guitar, soaring vocals and asides to the crowd. Joan Wasser has collaborated with so many eminent artists over the years, perhaps it's not surprising that some of their style has rubbed off onto her. Or perhaps it's the other way around? Fortunately, other than highlighting her relationship with Buckley in my head as she plays, this doesn't affect my enjoyment of the show a jot, and I'm particularly taken with the interplay between the three band members as they bounce off each other, taking their lead on the timing from the drummer and generally looking as though they're enjoying their work.

Although best known for her torch songs, the band belie this reputation by flexing their muscles and hitting the distortion effects pedals. A cover version of the Hendrix song "Fire" in particular raises the hairs on the back of my neck and brings to mind PJ Harvey circa "Rid of Me". The audience are perhaps warmly receptive rather than wildy enthusiastic, and applause between songs is heartfelt but somewhat short-lived, leaving gaps that Wasser is slightly too awkward to fill, preferring to endure a short silence as the applause dies down as she prepares for the next song (she does, however, pass a jumbo bag of Doritos around the audience, which is such an endearing gesture and the sounds of communal crunching soon fill the silence).

The show slips into self-indulgence towards the end, with the band playing a long, partly-improvised version of a fairly slow song with apparently little concern for their audience and a lot of attention on a very shaky solo by the bassist on a little acoustic guitar, but otherwise I enjoyed the show very much. This is a world away from your average singer-songwriter's material... it's certainly not perfect and there's perhaps more than a touch of the Antony and the Jonsons, Rufus Wainwrights and Jeff Buckleys about it, but you could be influenced by a lot worse people than that. Joan Wasser herself, in spite of her slightly shy and awkward stage presence, is a captivating performer. Perhaps time to check out her new(-ish) album.