Unless you're one of those strange people who plans these things months in advance, if you are anything like me, then you're probably still on the lookout for Christmas presents for various people. I find the hardest ones to cover-off are often the smallest; that little token present for that person you're not planning on spending more than a tenner on. If you haven't been struck by a brilliant idea, then no doubt you've been browsing the tat tables in various shops in the desperate hope of receiving some inexpensive inspiration, even if that means getting somebody something that (barely) seems amusing at the time and after all the polite thank yous are done is quietly put away and never thought of again. Well, somebody must buy that stuff.....

I'm sure you've got your own ideas, but if you'll allow me to humbly make a suggestion.....

The Art of Conversation by Catherine Blyth. 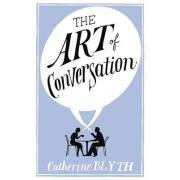 "A guided tour of a neglected pleasure"

"Mixing philosophy with literature Catherine Blyth wittily encourages conversation. It seems we’ve forgotten how to talk. The art of face-to-face engagement has lost its allure as the world of facebook has seduced us. Catherine Blyth is on mission to convert us back to pleasures of good conversation in this charming, celebratory look at repartee. Wittily mixing up philosophy with literature, blending science with psychology, and with a nod to the great chatterers of history, she persuasively argues the case for banter and badinage - it’s free, its fun and it gets your brain cells firing like the prettiest of firework displays."

I can sense that you're on your way to buy yourself a copy or two as we speak, so perhaps I should declare a couple of things here:

1) I haven't actually finished this book yet. In fact, I'm on about the fourth page of the introduction (every page of which, to be fair, I have enjoyed hugely).

2) The author is an old friend of mine.

I first met Catherine when she had the great misfortune to be assigned to eat her meals in my boarding house back in the distant, sepia tinged days of 1990. It can't have been much fun being a girl at my school: joining a tightly knit bunch of institutionalised emotional cripples when they've already had three years to form deep bonds and who, even at the age of 17, have absolutely no frame of reference for dealing with the female of the species, having spent most of their lives in single-sex seclusion. Catherine must have been a conversational genius even then, as she somehow managed to pierce my outer shell of awkwardness and establish that we actually lived only a few miles from each other. We soon bonded over the number 33 Johnsons bus that we had both used to get into Northampton as kids, and we never looked back. I admired Catherine hugely for having the strength of character to walk her own path at school and not to be beaten into conformity like so many others, including me. Many people spent their school years trying to make themselves as inconspicuous as possible, but Catherine always seemed to remain true to herself, even when that made her stand out dangerously from the crowd.

Much to my regret, we lost touch for a few years some time after University, but thanks to the magic of the internet and her very trusting husband generously forwarding on a speculative email from a complete stranger, we have rekindled our friendship. And look! She's only gone and written a proper, honest-to-goodness book. She's been on breakfast telly and met Rolf Harris and everything! The reviews have been excellent, but if she manages to distill a mere half of her wit, insight and droll humour into the book, then how could people not love it? It's hard to explain, but it makes me proud as punch to know that a friend of mine has managed to get something like this out into the shops. I waste my time writing nonsense on the internet, and she's gone and written a proper, published book that you can buy in an actual shop.

So, if you're struggling for ideas for Christmas prezzies this year, why not give someone you love the gift of conversation? You can pick it up for less than a tenner on Amazon, and it's included in the Waterstones 3 for 2.

Bearing in mind that I'm the kind of person who will deliberately and obtusely provide one word answers to small talk in the coffee queue, perhaps this is EXACTLY the kind of book I should be reading.....perhaps I should be more inclined to think of it less as a light and entertaining read and more as a self-help manual.

Beware: I might want to talk about this again once I've read it, so you might as well give in now and go and buy several copies. I'm only going to go on about it until you do..... (and actually, as I've already bought six copies, you may well be getting it from me for Christmas anyway).
Posted by swisslet at 19:17

Email ThisBlogThis!Share to TwitterShare to FacebookShare to Pinterest
Labels: back in the day, books, friendship