dreaming of the Osaka sun.... 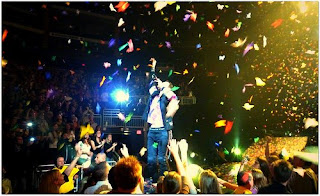 Coldplay are massive. I realise that this is something of a statement of the obvious given the sheer volume of records that the band have sold and as they are part way through a massive arena tour and have just sold out a date at Wembley Stadium in the summer in double-quick time.... but it was a thought that struck me as I looked at the crowd crammed into the National Indoor Arena waiting for the band to take to the stage. It wasn't so much the sheer numbers of them, although the NIA is a pretty damn big space, it was the diversity of them that really brought it home to me. Coldplay have sold so many records that their audience is now ridiculously diverse: at one end of the spectrum you have the Oasis-type fans who were in beered up packs of lads singing "let's all have a gang bang" in the toilets, through the families with small children and onto the desperately earnest looking teenagers dressed up in military jackets with coloured cloth tied around the sleeves. About the only type of person not represented here is the music snob.... because, of course, the received wisdom amongst those cognoscenti is that Coldplay are unimaginative, dreary knock-offs. They're radiohead without any of the talent or taste for adventure. The fact that they are massively successful only emphasises the point. Why would anyone who is serious about music like Coldplay?

Well, I do like Coldplay. I've liked them since the video of a gangly Chris Martin bounding along a beach in the rain first caught my eye on MTV when I was in the gym about eight years ago. A few weeks on from that, I bought "Parachutes" on the same day that I bought "Kid A", and I certainly know which one of the two albums I prefer. Alright, so Chris Martin is no Leonard Cohen when it comes to writing lyrics, and in his world there are an awful lot of puzzles missing pieces and questions without answers and an awful lot of hand-wringing and abstract worrying, but somehow none of that has ever really mattered to me. For some reason, they've always seemed to strike a chord.

They played a strong set tonight, bookended by the different versions of "Life in Technicolour". They have now got enough material that they are able to play singles like "Violet Hill", "Clocks", "Speed of Sound", "Fix You", "In My Place" and "Yellow" very early on in the set. "Fix You" in particular, a song that I've never quite liked, seeing it as being too much like Coldplay in excelsis, is embraced by the crowd and becomes the night's first - but not last - mass communal singalong. He often comes across as awkward, but Martin is confident enough a performer now that he is able to stop the crowd mid-singalong and chastise us for being slightly out of tune and starting us off again. He's also happy to ad-lib the lyrics to songs to exhort us to sing louder. They've come an awfully long way since "Yellow", that much is clear. It's a nice enough song, but compared to their more recent material, "Strawberry Swing" say, or "Death and All His Friends", it sounds simplistic and childish. Perhaps it was early in the gig, but I'm also not too sure, judging from the rather lacklustre singing, that the crowd actually know it all that well either.

The new material sounded pretty good. "Lost" (thankfully without Jay-Z), "Cemeteries of London" and "42" all sound good, and "Viva La Vida" is a showstopper with a vocal harmony section at the end seems tailor made for a crowd to roar along to. They use the arena well too. All too often these are soulless barns with poor acoustics, but the sound tonight is good, at least where we're sitting level with the side of the stage. There are several double-sided screens, to enable everyone to get a good look at what's going on, and there are a number of large illuminated chinese lantern style lights hanging from the ceiling that are also used from time-to-time for supplementary projection. The band themselves are far from static: they do a little segment at the end of one of the walkways, where they emphasise the strength of their material by playing songs as good as "Talk" and "God Put A Smile on Your Face" in a slightly offhand, casual way. Later on in the show, the band also made their way along the side of the arena to a space right at the very back, from where they play another few songs. This is the second of three nights that the band are playing in this venue, but unlike many others in their position, they actually look as though they've given a bit of thought to how they can make the show accessible to their audience in what might otherwise be a rather soulless barn.

I think that might be one of the things that people respond to about Coldplay, actually: they look as though they are slightly surprised to be as successful as they are, and not entirely sure that they deserve it. This manifests itself both in Chris Martin's constant vacillation between wild boasting about how good they are to hand-wringing despair about his own inadequacies. Perhaps more productively, it manifests itself as a determination to use their position to try to highlight some worthwhile causes, and Oxfam are again highly visible around the venue. Sure, Coldplay aren't going to end world poverty by allowing Oxfam to collect a few signatures, but at least they're trying to do something constructive and aren't brought to us in association with Budweiser or someone.

The band finish the show with "The Scientist", an absolutely barnstorming version of "Lovers in Japan" where phosphorescent ticker-tape rains from the ceiling, and leave us with "Life in Technicolour II". It's a good show. The new songs sound great, the old songs are received by the enthusiastic crowd as old friends. The band seem to have a good time, with Chris Martin being his usual puppy-ish, bouncy, cheerful self. We all have a good old sing-song. It's a good show. No question. So why is it that I feel slightly distanced from the whole thing? I look at the guy doing some ill-advised dad-dancing in the aisle; I look at the people having their photos taken against the stage with their thumbs aloft; I see the guys in their homemade Viva La Vida jackets doing the pointy finger dance... all are clearly enjoying the show and unselfconsciously throwing themselves into the songs, and I feel slightly distanced. I enjoy myself, for sure, but I can't help but feel that I'm not as moved by this band as I used to be. They're a good band. They're not a cool band, certainly, but I still think they're a good band. I also think that they're getting better and more interesting with every album they record. "Viva La Vida" is not a perfect album by any means, but it at least shows signs of a band trying to move their sound on - Coldplay are certainly no Oasis, that much has always been clear (on almost every level). I don't know. The show is good, but for me it lacks some of the exhilaration of seeing a band like White Denim in a small venue, the sheer visceral thrill of rock music, and it also lacks the emotional palette and subtlety of - say - an Elbow gig. I've enjoyed Coldplay playing in huge venues before - Glastonbury (twice), Nottingham Arena, the Reebok Stadium in Bolton.... so I don't think it's the size of the venue. Maybe it's all a bit too efficient? Are Coldplay becoming more clinical as they get better at what they do? Or maybe it's me? The band are good tonight, so I think it must be me.

As we walked back to the car after the show, a car raced past us with a young guy hanging out of the window screaming to anyone he passed, "COLDPLAY!". Now, I like the band and I don't really care what people say or think about them, but that guy really needs to get out to more gigs.

(incidentally, if tonight's gig taught me anything, it taught me I should be more grateful for the number of venues that we have in Nottingham..... on the way to Birmingham tonight, we were somewhat delayed by the closing of two junctions on the M42, and on the way back by the closing of an underpass in Birmingham city centre. I always try to think, when sat in traffic and looking at my watch, that the chances are that someone is having a much worse day than me. Even so, it's really nice to be able to be within easy reach of so many decent venues....)

Update: this very gig is reviewed in the Observer by Kitty Empire.... who loved it. Coldplay getting a good review? *gasps* (she also mentions a load of stuff that I forgot to bring up, so worth a read)
Posted by swisslet at 21:56