god is a concept by which we can measure our pain....

I really shouldn't waste my time getting irritated by stuff like this, but.... 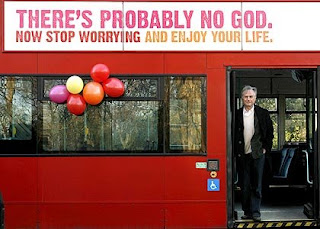 You know, the advertising campaign sponsored by the British Humanist Association from an original idea by Ariane Sherine, who had been appalled by some of the religious messages she saw on buses. I'll quote her directly:

"Yesterday I walked to work and saw not one, but two London buses with the question: "When the Son of Man comes, will He find Faith on the earth?" (Luke 18:8). It seems you wait ages for a bus with an unsettling Bible quote, then two come along at once....There was also a web address on the ad, and when I visited the site, hoping for a straight answer to their rather pressing question, I received the following warning for anyone who doesn't "accept the word of Jesus on the cross": "You will be condemned to everlasting separation from God and then you spend all eternity in torment in hell. Jesus spoke about this as a lake of fire which was prepared for the devil and all his angels (demonic spirits)" (Matthew 25:41). Lots to look forward to, then. Now, if I wanted to run a bus ad saying "Beware – there is a giant lion from London Zoo on the loose!" or "The 'bits' in orange juice aren't orange but plastic – don't drink them or you'll die!" I think I might be asked to show my working and back up my claims. But apparently you don't need evidence to run an ad suggesting we'll all face the ire of the son of man when he comes, then link to a website advocating endless pain for atheists."

Determined to do something about this, Sherine then set about raising enough money to run some atheist adverts on buses... and aren't they a whole lot more uplifting than the usual crap you see on the side of a bus. It makes me smile. It's not saying that there definitely isn't a God, it's just saying that maybe you should be worrying about something else instead.

Richard Dawkins, as you might imagine, and as pictured on the bus above, thought this was a brilliant idea, but so did lots of other people, and they soon raised £140,000 to run the campaign as widely as possible.

Brilliant. You'd have to be completely humourless not to see the funny side, wouldn't you?

"There is plenty of evidence for God, from people's personal experience, to the complexity, interdependence, beauty and design of the natural world. But there is scant evidence on the other side, so I think the advertisers are really going to struggle to show their claim is not an exaggeration or inaccurate, as the ASA code puts it."

So you're suggesting that there is more evidence for the existence of God than there is evidence that God doesn't exist? Where exactly?

Well, the complaint goes on, "According to growing numbers of scientists, the laws and constants of nature are so "finely-tuned," and so many "coincidences" have occurred to allow for the possibility of life, the universe must have come into existence through intentional planning and intelligence. In fact, this "fine-tuning" is so pronounced, and the "coincidences" are so numerous, many scientists have come to espouse "The Anthropic Principle," which contends that the universe was brought into existence intentionally for the sake of producing mankind. Even those who do not accept The Anthropic Principle admit to the "fine-tuning" and conclude that the universe is "too contrived" to be a chance event...."

The Anthropic Principle? What about the infinite monkey theorem that states that a monkey hitting keys at random on a typewriter keyboard for an infinite amount of time will almost surely type a given text, such as the complete works of William Shakespeare. That being so, why is it so hard to believe that, in an infinite universe, it might be possible for a series of absurdly unlikely accidents and coincidences to happen and create life? Or is God an infinite monkey? Why am I even attempting a rational argument?

I'd go on with the detail of their complaint, but I'm rather losing the will to live. You can read the whole thing here, but it cites various scientists, including Sir Fred Hoyle and Stephen Hawking, as apparently all being forced to conclude that God does, indeed, obviously exist.

Actually, that might just be the funniest thing I've ever heard.

As I drove home this evening, there was a big sign outside the church just around the corner boldly proclaiming "JESUS IS HOPE". No caveat there, is there? Jesus isn't probably hope, he is HOPE. Definitely.

The atheist message was originally intended to be "There is no God. Now stop worrying and enjoy your life." The Advertising Standards Agency would only allow them to run the campaign if they added the word "probably". Possessing previously unheralded metaphysical authority, the ASA determined that the advert had to leave room for doubt, and they insisted that it acknowledged that there is "a grey area".

So if the atheists are forced to put in a caveat, how come the christians aren't?

Anyway, why are christians getting so agitated about this? Why do they feel so threatened by atheists? Why are they so interested in anyone "proving" whether God exists or not? I thought the whole point of their religion, and the source of all their smugness and immunity to rational debate, was that it was based upon FAITH. Not hard evidence. After all, there can be no hard evidence that a made up mystical, all powerful being exists, can there? The whole thing is based upon the blind belief that there is something guiding our miserable lives and that there might be somewhere better for us to go once we had died, as long as we'd lived a good and worthy life. Why should they give a shit about proof? And actually, why should they feel that they're a special case, somehow worthy of special treatment, with a right to leave things like copies of their hubristic and mostly fictional propaganda material in every hotel drawer? Who do they think they are? God's chosen people?*

I realise it's a waste of time being angry about this, but I simply cannot help myself. I pride myself on being a rational, tolerant and reasonably intelligent human being, and I find this kind of bullshit infuriating. Everyone has the right to believe what they want, of course they do, and I know that lots of people draw huge comfort and solace from their faith. I also realise that the silent majority of christians probably aren't in the least bit worried or threatened by these atheist adverts. It's a small but vocal and high profile minority that are kicking up this fuss, and it's them that have annoyed me. Why do they feel the need to inflict themselves on everyone? Why can't they respect anyone else's views or opinions when they don't agree with their own? Why do they have to be so fucking self-righteous about everything?

*ah no, they're busy bombing schools and shelling civilians at the moment, aren't they?