At some point in the first episode of "Guns & Germs & Steel" that I watched the other day, Jared Diamond holds forth on the part of his grand theory that reckons that one of the reasons that Eurasian societies conquered the rest of the world was because we lucked out by having the most easily domesticated species of animals nearby (sheep, cows, goats, horses and the like). According to him, it was this fact, coupled with the equally convenient presence of easily domesticated and long-lasting crops like wheat and barley, that helped us move away from a hunter-gatherer lifestyle and into a more settled agricultural existence with the kind of specialised roles in society that enabled us to focus on things other than our next meal. So, obviously, with all that extra time on our hands, we built some really cool weapons of mass destruction that we then inflicted on the rest of the world.

Well, I'm not about spout off about Diamond's theory - although, if you ask me, it all sounds a little convenient, and besides, QI told me the other day that horses originated in the Americas, and if Stephen Fry says it's so, then it must indeed be so....

As Diamond was talking though, I did look over at the sprawled shape on the beanbag by the radiator and idly wonder at what point in history the cat had been domesticated. It didn't take me long to realise that, in fact, the cat has never been domesticated. They turned up one day, liked what they saw and found a way to wrap us so tightly around their little paws that we happily provide them with everything that they need and then ask if there is anything else we can possibly do for them. It wasn't the cat that was domesticated by humans, it was humans that were domesticated by cats.

This came to mind in the very small hours of this morning when I awoke to find myself distinctly marginalised in the bed. This isn't all that uncommon an experience, to be honest, but as C is currently in Paris, it took my sleep and Night Nurse addled brain a few minutes to work out what had happened and why I was now hanging out of the bed and slowly freezing to death.

It was a cold night, so as I had made my way up to bed, I'd made myself a hot water bottle (yeah? what of it?). The cat, it turns out, is no fool. She doesn't often sleep on the bed, but her special cat senses must have told her that there was an extra-warm patch to be investigated tonight. Upon discovering the source of this hot spot, she had proceeded to methodically elbow me off the hot water bottle and practically out of the bed all the better so that she could curl up and benefit more directly from this new heat source. 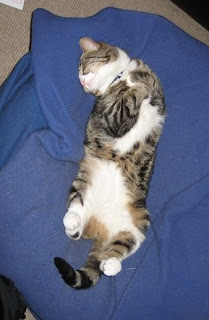 And so what did I do once I had worked out her little game? Did I boot her off the bed and resume my posession of the hot water bottle? Did I hell. I tried to grab as much of the bed back as I could without disturbing her, and then went back to sleep in a really uncomfortable position.

Cat's rule the world. Or if not the whole world, then at least the most comfortable parts of it.
Posted by swisslet at 18:24