just around the corner in the english civil war.... 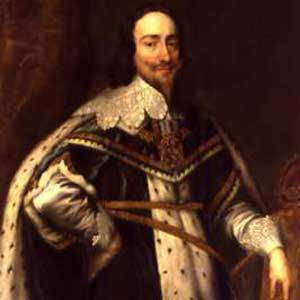 Today marks the 360th anniversary of the execution of Charles I of England, Scotland and Ireland.

Charles reigned from 27th March 1625 until 30th January 1649, when he was beheaded on the orders of Parliament after being found guilty of high treason and "other high crimes". He wore two shirts that day, lest the cold weather make it look as though he was shivering from fear, and he was beheaded by a single-stroke from the executioner. As his head left his shoulders, an audible gasp was heard from the assembled crowd, and there was a rush as they tried to dip their handkerchiefs in the blood of a divinely annointed monarch.

Given that the monarchy was restored in 1660 and we still have a royal family firmly in place today, we tend to forget how enormous a moment in history this was. The American Declaration of Independence was more than a 100 years later and the French Revolution was still 140 years away on the day when the English Parliament cast aside their king and set up a Republic. Both those other revolutions were massively influenced by these events in England, which were entirely without precedent. Of course, Kings had been removed in the past, and Parliament itself had been used by various usurpers in English history to legitimise the deposition of a legitimate monarch and their own succession -- Edward II, Richard II and Henry VI were all removed with some form of Parliamentary consent. This was different though. In each of those other examples, the deposed king had been replaced by another king with at least some figleaf of justification for their right to the throne. Charles I was removed by a Parliament who had no intention of putting another monarch on the throne or doing anything other than ruling the country for themselves. We are not traditionally seen as a nation of rebels and anarchists, yet we overthrew our monarchy long before it became fashionable. The fact that this Republic did not ultimately endure should not lessen the magnitude those events more than three centuries ago.

These were very confusing times, and it's always dangerous to wonder how things might have turned out if things had been only a little different, but for me it's still irresistible to think how different our history might have been if we'd never put the monarchy back in place in 1660 and had instead remained a republic for the last 360 years. It's pointless to speculate, of course, but imagine how different a place the world might have been. Would Britain have still ruled the waves and built a massive worldwide empire? Would there have even been an American Revolution at all? What would all those people selling postcards of Princess Diana to tourists be doing now instead?

Nevermind the speculation, the fact remains that England executed its king on this day 360 years ago. I know I'm a history bore, but I will certainly be spending a couple of minutes today thinking about those momentous events all that time ago.

You knew there was an English Civil War, right?

[as a point of interest, I wrote this post at the beginning of January and filed it away for publication at a time when I would be away skiing. That's pretty sad, right?]
Posted by swisslet at 07:30