out of my reach but always in my eye line... 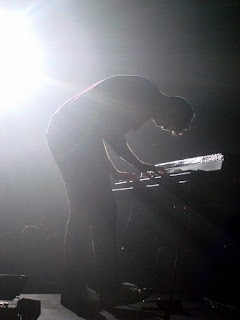 I had completely forgotten that I was supposed to be attending this gig. Well, that's not true; I knew that Mike had been kind enough to offer me his reviewer's "plus one"for the evening, only for some reason I had written down in my diary that the gig was on Monday night and not on Sunday night. Having only returned from the French Alps on Saturday evening, exhausted and with a couple of my bags lost in transit somewhere, I think you could say that I was perhaps not in the best frame of mind for any kind of gig, never mind an arena gig. Neither was my mood greatly improved when someone stole my towel from the side of the swimming pool before I headed into town to meet up with my benefactor. Do you realise how hard it is to look righteous when you're dripping wet and dressed only in your swimming trunks? Grateful as I was for receving a free ticket, I have to say that the prospect of seeing Keane was not one that filled me with great joy.

What is it about Keane? Not so very long ago, they were the band that all the cooler music press were tipping for great things. "Somewhere Only We Know" was being rapturously received and the band were being talked of as being the next big thing. I bought the single (remember them?) and I thought it was pretty good. I saw them performing in the pissing rain at Glastonbury in 2004, and I thought they were pretty good then too. The album, "Hopes & Fears", was (if my memory serves me correctly) only a whisker away from being the bestselling album of that year, pipped only by the Scissor Sisters. Even as the journalists who tipped them for success were being proved right, the very same journalists turned on them. How dare they be so successful? Aren't they just the most insipid thing you've ever heard? And look how chubby the singer looks. How dare he? How dare they?

I know it's a time honoured tradition to build people up only to knock them down again, but that doesn't make it right. "Hopes & Fears" is a perfectly good album. I think perhaps they're a little over-wrought, and Tom Chaplain would probably over-emote if he was singing the ingredients on a crisp packet, but the boy can certainly sing, and with songs as good as "Everybody's Changing" and "Somewhere Only We Know", what did it matter that they looked a touch awkward now and again?

Even so, as I tried to park the car at about 19:15 to meet up with Mike in time to watch the support, I was cursing Keane's fans for all I was worth. Doors only opened at 18:30, so I had reckoned that I would have no problem parking up. What I had forgotten though was that Arena gigs in general, and Keane gigs in particular, attract the kind of fans who think that the time written on the ticket is the time they must turn up. That's fair enough, I suppose. I personally prefer to roll into a venue just as the headline act is limbering up to bounce onto the stage, but then I go to a lot of gigs. That sounds snobby, and it's not supposed to - it just meant that I found myself pushing through crowds of excited fans when I'm accustomed to attending gigs with people who are a little more jaded and offhand.

By the looks of their audience, Keane's target market is, well, me. Not me exactly, perhaps, but certainly the arena was full of white, middle-class couples who danced in an enthusiastic, but slightly autistic, way to the songs they recognised. They were excited, bless them. I was not, although Keane have surprised me in the past by being far, far better live than I was expecting, so I wasn't writing the evening off just yet, even if I would far rather have been tucked up in front of the fire at home with the first Rebus novel (they're good, aren't they?)

They're alright, I suppose, but I think that if you are going to have a sound that is so overtly rooted in the 1980s, then you really need to have the kind of songs that will really stand out. For my money, and I know they've been tipped in various quarters for bigger things, Frankmusik do not have those songs. The singer has been suffering from a bad throat and had to cancel a gig earlier in the week, but he sounded to me like a low-rent Marc Almond, and the pumping keyboards did nothing for me at all. They were politely received by the crowd, but no more than that.

Keane, on the other hand, were rapturously received when they bounced onto the stage at 20:30 on the button. The stage was decked out in neon to match the colours of the album cover to "Perfect Symmetry", and Tim Rice-Oxley was resplendent in a shirt that he probably thought did likewise, but which I rather took to be a tribute to the Rubix Cube and to the general 1980s theme of their new material. A few things are immediately apparent: Tom Chaplain is wearing a guitar. A guitar! and the band now have a bassist. For some reason, much has been made of the fact that the band have been a threepiece and that they singularly lack guitars. On the first record, this was fine, but by the time on "Under the Iron Sea", it seemed as though the band were trying to broaden their sound and to compensate for the lack of a guitar by using guitar effects on the keyboard. To their immense credit, rather than accept that they must exist in this particular box forever and restrict their sound, Keane have simply added bass and guitar to their sound without any great fuss or fanfare. It works out just fine. The bassist occasionally looks a little confused about his status in the band, dashing down the runway to the front before seeming to realise where he is and shuffling back a little shamefacedly, but it really is no big deal, and the band sound bigger live than they ever have done before.

There's a problem though: Keane seem to be a band that are trying to move away from what they were, but they haven't quite yet worked out what they are. The result is that their new material sounds slightly awkward and lacks the depth of quality of their earlier work. Drummer Richard Hughes plays around with some electronic effects, but the band clearly aren't as committed to them as - say - Radiohead were with "Kid A", and it just seems distracting. The old songs are rapturously received and brilliantly played by the band, but the new songs, for me anyway, simply aren't as good. They are neither as anthemic or as convincing. It's a problem encapsulated by two of their recent singles: "Spiralling" is almost smothered by 1980s keyboards and "wooos", but there is clearly a song in there trying to get out. Initially I didn't like it very much, but repeated listens and I was able to get past the production sheen to see what the band were trying to do. For my money, their other new songs have the same 80s production sheen, but lack the basic, underlying quality. "Perfect Symmetry", on the other hand, is a fairly straightforward song done in a reasonably traditional Keane style - but when it was released as a single, only peaked at number 150-something in the UK charts. So where do they go from here? The band deserve much credit for trying to move their sound on (compare and contrast with Oasis, for example), but at the moment they seem to be a little stuck between two stools, and are neither convincingly different, nor as good as they were before. The simple, inescapable truth is that the older songs really show up the lack of depth in much of the newer material.

It's not all bad news though, because as a band, Keane are now a pretty formidable live act. Tom Chaplain looks very trim, wearing a pair of jeans so tight that they must have been sprayed on, and his voice is in as fine fettle as always. With the addition of the bass and the guitar, they now pack quite a sizeable punch, backed by some quite entertaining 1980s (of course) computer graphics on the big screens. All is definitely not lost. If they find their songwriting mojo, then they will be fine. They may never be cool, and there will always be people who are quick to decry them as boring and as somehow inappropriate and undeserving rock stars, but I like the fact that someone as awkward, thoughtful and gangly as Tim Rice-Oxley can be a rock star. Better him than those gibbons from Kasabian, anyway. I'm not gone on their new material (and in fact, I'm positively unmoved by a lot of it, remaining anchored to my seat), but you can't argue with the effect they have on the majority of people in the arena. Several thousand people are slightly awkwardly moved by their heroes to clap slightly out of time to the music and to wave their mobile phones in the air. They leave happy, and in an odd way, so do I. It's not the best gig that I've ever been to, not by a longshot, but I find that I really want Keane to find their way and to make their next record the one that *really* makes the cool music press angry.

Verdict: 6.5 / 10 (although I am distinctly unsure about the big screen advert for Amnesty International being preceded by one for BlackBerry. )

Mike's review can be found here.
Posted by swisslet at 08:41