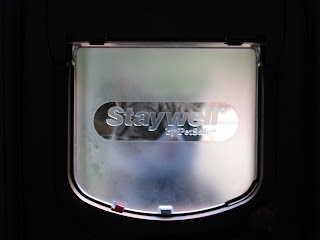 We had a note pushed through our door the other day. It was in a plain brown envelope with "FROM A NEIGHBOUR" written across the front. C. was hopeful that this might be someone returning the tax disc she managed to lose between the front door and her car, but I've seen things like this before and had an inkling that it might be something else entirely. Indeed, upon opening the envelope, I was confronted by a piece of hole-punched A4 paper entirely filled with a carefully handwritten note. Well, I say carefully written, but as it is riddled with typos, appalling punctuation and features the liberal use of correction fluid, perhaps that not quite the right phrase. It's all in capitals and literally every other word is underlined wihth two pen strokes, presumably for emphasis.

I noted all of this, and then read on with a sense of some trepidation.

WHAT ARE YOU PEOPLE THINGING OFF HAVING A CAT DOOR ON THE FRONT, RIGHT NEAR THE MAIN ROAD. YOUR CAR DOOR SHOULD BE AT THE BACK NEAR GARDEN. WAY YOUR 2 CATS SHOULD HAVE BEEN BROUGHT UP THE GARDEN WAY. I HAD TO STOP A CAR FOR YOUR CAT THE TABBY ONE WHO IS VERY SCARED OF CARS FOR IT TO CROSS THE ROAD, I DONT KNOW IF YOU WORK IN THE DAY YOU DONT SEEM TO LOOK OUT FOR YOUR CATS, AT ALL YOU LET THEM WANDER. IF YOU ARE NOT THERE IN THE DAYTIME YOUR TWO CATS SHOULD BE KEPT IN. AWAY FROM THE ROADS. PUT YOUR CAT DOOR NR GARDEN END WHERE IT IS SAFE. AND YOU SHOULD BE OUTSIDE SOMETIMES WATCHING THEM. YOU HAVE 2 VERY LOVELEY CATS I WOULDNT LIKE ANY HARM TO COME TO THEM.

I read the letter again, scarcely able to believe what I was reading. It didn't really get any better second time around, and now I was just angry. Leaving aside the fact that we only have the one cat, I am struggling to understand where this person gets off leaving us an anonymous note like this. What are they expecting us to do, exactly? Yes, the cat flap is in the front door, and yes, I would have preferred it to be in the back door... but it wouldn't fit on the door. Besides, that cat flap has been in place for more than a year now, and I fail to understand how they think that having it on the side of the house would prevent our cat from wandering onto the road. What the hell is "the garden way" anyway? When we got our cat, we made some choices for her. Among those choices was our decision that she should have free access outside. We can close the flap, but we choose to let her come and go as she pleases during both day and night. We do both work during the day (again, something that's not very difficult for all but the most casual of observers to work out), but we consider it better for our cat's welfare that we don't shut her up indoors whilst we are away. Actually, I rather think she spends most of the day asleep on her beanbag, but she can go outside whenever she likes. She's not very road smart, I agree, and I wish she wouldn't sit on the road as a car approaches, but what exactly can I do about that? Most of our other neighbours know her well, and because she's friendly, they pick her up and move her when they need to. Rather than imprisoning her indoors, I'd much prefer that she lives as free-range a life as possible, even if that does perhaps introduce a risk that she might get hurt by cars on our (reasonably) quiet suburban street. 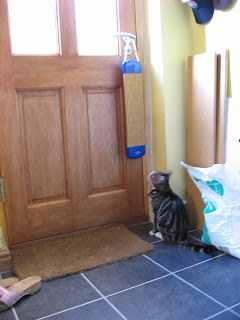 But why do I feel I have to justify our choices at all? What gives this anonymous note sender the right to be so damn rude and yet so apparently keen to remain anonymous? They have felt moved enough to write out this note, but they haven't even taken the trouble to check their facts before shooting from the hip. If they really cared about our cat (and I find it hard to believe that anyone could care about the welfare of that cat than we do - she's positively doted upon), then would they not just have a word with us? What, exactly, is this note supposed to achieve? 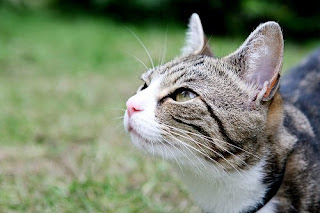 I know I'm wasting my energy just thinking about this, but sometimes people really piss me off.
Posted by swisslet at 20:24