the old king is dead, long live the king.... 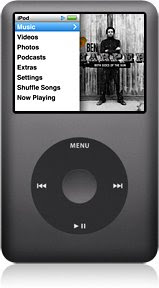 There was very nearly a crisis today at work. No one died of swine flu or anything, and the business still appears to be in one piece.... but bugger all of that: my iPod nearly died. In fact, it may still die. It's looking a little touch and go at the moment, to be honest.

It's my own stupid fault. When I was unpacking my bag last night, in the act of pulling out my lunchbox, I flicked my iPod across the kitchen. It flew through the air, as if in slow motion, and then landed, face down, next to the cat's bowl of kibbles with a resounding and somewhat disconcerting SMACK.

I stared at it for a second or two, and then slowly, almost reluctantly I bent down to pick it up. The screen hadn't cracked, which was something, and a quick look told me that it seemed to be loading up okay. I heaved a sigh of relief and put it to one side.

Me and that iPod go back a long way. Well, three years, anyway. It was the replacement for the original 3G iPod - the first that was compatible with PCs - that was stolen back in January 2006. A number of other things were taken at the same time, but that was the one that really hurt and wa replaced as quickly as possible. Apple products are famous for breaking down just outside of their warranty, so three and a half years lifespan on a product with an initial twelve month warranty isn't too bad. I own several other iPods, but this is my main man - my 60GB iPod that holds every single bit of music I've ever ripped. Even though I always have my iPhone on me, and it has a small selection of tunes on it, I still almost always carry my big iPod with me. Who knows when you're going to want to listen to that Soulwax album? Or that Sleeper single? Or that piece of Cuban jazz? Or that Kia Ora advert ("too orangey for crows....")?

Anyway. I was struggling to concentrate on a document in the office this morning, and I reached for my iPod to try and shut out any ephemeral noise. I plugged in, selected the new Bat For Lashes album, and was then horrified to see what looked like a large watermark across my screen. It was only visible when the backlight was on, but it looked very much like the fall had damaged the screen. Never mind.... as long as the music works. Which it did. Until the penultimate song, when it just stopped dead and made some minor clicking noises. A couple of hard reboots and a change of album later (Scott I), and everything seemed okay again.

I was concerned; concerned enough that I popped across to the Apple website to see what repairs cost. Nearly £140. Okay. So how much is a new one? My first surprise was that Apple now only make a single iPod with a hard drive. Perhaps not surprisingly given how hard they're pushing video content, Apple think that the iTouch is the future. Perhaps it is, but with a maximum capacity of 32GB, that just isn't going to cut it for the kind of user who wants to carry their entire electronic record collection around with them, and doesn't want to spend their time mucking about with playlists. Still, they do make a 120GB "classic" iPod, double the capacity of my existing one and quite a lot smaller and sleeker. How much? £175. It's as though they want you to buy a new one rather than have your old one repaired or something.....

I went to check out the reviews on iLounge.

.....Hang on a minute. Am I mourning the possible demise of my old iPod, or am I getting excited about the opportunity of doing a bit of gadget shopping? Well, let's not be hasty - my old, much travelled and much loved iPod is not actually dead yet.

If you'll forgive me imagining my old iPod in the role of Shakespeare's Henry IV, finding that the new iPod (Prince Hal) has taken his crown as he slept:

"I stay too long by thee, I weary thee.
Dost thou so hunger for mine empty chair
That thou wilt needs invest thee with my honours
Before thy hour be ripe?
O foolish youth! "

The king isn't dead yet. He may be unwell, but he's hanging on in there. In fact, he played me some Ruby Suns and a bit of Rage Against the Machine as I finished that dreary bloody document off before heading home...... So let's give the old boy a chance, eh?

Uneasy lies the head that wears a crown, eh?

...yeah, you're right. I'm going window-shopping at the weekend and everyone knows it.
Posted by swisslet at 21:06

Email ThisBlogThis!Share to TwitterShare to FacebookShare to Pinterest
Labels: iPods