our castle and our keep...

The world is in recession; banks are being dragged under by bad debt and are being bailed out with Government money; shares are plummeting; people are being laid off in their thousands; the property market has collapsed.... Meanwhile, in my middle class world, we're having a loft conversion done.

People tend to raise their eyebrows when I tell them this, and they then leer at me suggestively and ask if we're feathering the nest. Nudge, nudge. Wink wink. Say no more. At this point, I generally feign confusion and ask them to spell out whatever it is that they're insinuating. It's a jovial way of asking if we're planning a family, apparently.

No. Not at the moment.

We actually talked about getting the loft converted from the very first moment that we looked around the house with a view to putting in an offer, but for various reasons, we never got around to doing anything about it. We actually considered moving somewhere bigger about 18 months ago, but in the end settled on getting our little garden sorted - last year's project - and getting the loft done. So why now? Well, the reason for the building work is that we've finally managed to entice our Austrian friends and their two kids over from Vienna for a week in the summer. We're going to try to repay the kindness they showed us when we got married (and every other time we've been to Vienna) by taking some time off work and showing them around the country. We've arranged to borrow my dad's big car so that we can shuttle everyone around in go. No, please don't ask why my dad used to ferry my two brothers, my mother and me around in a Fiat Strada and then bought a massive people carrier as soon as we all moved out. So, an extra room and an extra bathroom are going to be really handy.

Anyway. That's what C told me was the reason for getting the work done, anyway.

The work has been going on for a few weeks now, but it's only since Monday that the builders have been working in the main body of the house (and not just in the roof), so things have moved on pretty quickly since then. I've got new stairs and things.

I'm hardly Kirstie Allsopp, but here are a few photos of what's suddenly appeared over the last couple of days. 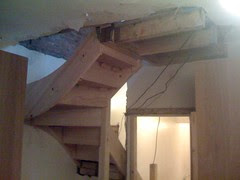 This is the view from our bedroom. You can see the door there on the right hand side of the picture, and you can see how we've lost a chunk out of the corner of the room where the stairs turn and head up into the attic. Apparently our ceiling is in a terrible state, and bows towards the middle of the room, so the builders are actually going to completely replace it. Free. It makes their lift a lot easier, apparently. It will come down a couple of inches to accommodate that new landing you can see hanging down, but will still be tall enough that I will only just be able to touch it with my arms above my head. Plenty of headroom. They're also cutting down one of our tall wardrobes so that it will fit underneath the new stairs. 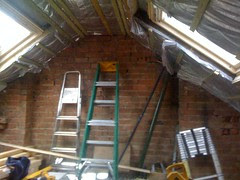 Apart from the photos that C. took though the hole in the floor last week, it was only on Wednesday evening, when I came home to find the stairs had been put in, that I was able to see what the builders had been up to for the last few weeks. It's somehow much bigger and more airy than I was expecting. I was also a touch worried about how much headroom I would have under the slant of the roof, but it's plenty high enough. The velux windows are absolutely huge too, and when the rain started to hammer down onto them, I was thrown back to my old bedroom in the house where I grew up, where the partially flat roof used to make a hell of a noise when it rained. I found the sound very soothing at the time, and apparently I still do. 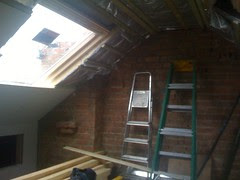 Look at the size of that window! And there's our missing stepladder (on the left). 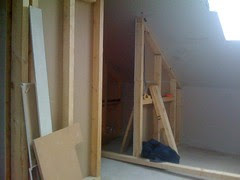 The room was looking quite a lot less spacious when I got home this evening, but only because the builders had started to box in the bathroom. There's another velux window to go in yet, and obviously none of the bathroom fittings have gone in yet, but things are taking shape really quickly. 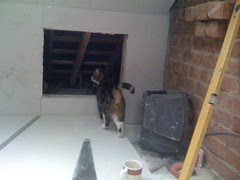 It seems that C. isn't the only member of the family who is intrigued by the new room. Minou is staring into one of the cupboards that will provide us with storage space underneath the eaves, and it's surely only a matter of time before she explores these new and interesting places more thoroughly. Luckily, she is currently finding the remains of the builder's lunches more interesting..... She's in the habit of rolling around on her back, displaying her fou-fou to the world, and as a result has been filthy dirty since the moment the builders first arrived.... the little tart. Like everyone else she meets, Minou appears to have the builders wrapped well and truly around her little paws. Trollop.

More exciting middle-class building expansion news as it happens!
Posted by swisslet at 20:50