I haven't inflicted the contents of my internal jukebox on you for a while, so I'm raring to go. Straight into it, then, eh?

Well, whatever else you might say about Courtney Love, there's no denying the enduring appeal of this song, originally released in 1998 and a fixture in my head pretty much ever since. Yes, it was co-written with Billy Corgan, but the way that Love spits out the lyrics is just superb. Great riff too, which can't hurt. Melissa auf de Maur looks great in the video too.

I still haven't got round to buying the album, but the haunting way that Jimi Goodwin delivers this song has been stuck in my head now for several weeks. Is it only Mancunian bands that can conjure up this level of melancholia? Is there something in the water up there or what?

Booker T was on Later.... a few weeks ago, and as well as treating us to a few bars of his most famous (and still vibrant sounding) tune, he also played a rip-roaring hammond organ version of the Outkast hit. I didn't quite recognise it at first; it was naggingly familiar for a moment or two before it became entirely obvious. Great song. It sounds great the way Outkast do it on the original, it sounds great done as a straight-up ballad with a single voice and acoustic guitar, and it sounds pretty damn good when played - without vocals - on the hammond organ with a backing band. Mind you, I imagine that Booker T could make Boyzone sound funky on his organ, nevermind Andre 3000. It's hard to go wrong with a song that good, I think.

> "If You're Into It" - Flight of the Conchords

Typically, I forgot that the second season of the Conchords was starting on Tuesday, and only remembered to check on Thursday morning. D'oh. It's not on the iPlayer for some reason either. Still, this was pretty much my most played album of last year, and although this song isn't on the record, I've also been re-watching the first season on DVD. This is a beautiful little lovesong that Bret writes for Coco...

"If you want me to,
I can hang 'round with you
If I only knew, that's what you're into

that goes distinctly wonky in the middle....

"Then on our next date,
Well you could bring your roommate
I don't know if Stu is keen to
But maybe we could double team you

How 'bout you and two dudes?
Him, you, and Stu in the nude
Bein' lewd with two dudes with food
Well that's if Stu's into it too"

Very, very funny. I hear the second season is going to be the last.... well, perhaps it's right to go out whilst you're still on top. They've done pretty well with it so far, but how far can a gag about being formerly New Zealand's fourth most popular guitar-based digi-bongo accapella-rap-funk-comedy folk duo really stretch?

It's the European Elections soon, and as well as having to put up with hateful rubbish being pushed through my letterbox by the UK Independence Party (ripped up and posted back to them in their thoughtfully provided postage paid envelope with some added cat food), I had the dubious pleasure of hearing the BNP's Nick Griffin on the radio. Apparently he has no objections to "the likes" of Rio Ferdinand and Ashley Cole playing for the English football team, it was simply a plain fact to say that they could never ethnically be described as being British. White people, you see, have been living in these islands since before the last ice age. I was driving to work when I heard him holding forth on this, and it made me sick to the pit of my stomach. He's obviously a moron, but it makes me so angry to hear this half-thought out shit being presented to people as some sort of rational argument. So what you're saying, Nick, if I understand you correctly, is that you've drawn an utterly arbitrary line in the sand and you're saying that there were white people here thousands of years ago, therefore all white people here are ethnically British? So just as you presumably lump all coloured people into the category "not ethncically British", then all white people are "ethnically British". Um, isn't the whole concept of being ethnically British a nonsense? Aren't we, like most other groups of people, the result of thousands and thousands of years of interbreeding? We proud British are a mongrel race, with the flotsam and jetsam in our genepool from the hundreds of invaders and vistors these islands have had over the years: saxons, angles, vikings, romans, normans.... to think that we can in any sensible way be called a specific "race" is a total nonsense. Still, what do you expect from the leader of the British National Party? Well thought out, rational argument? This all called to mind British Sea Power's celebration of the influx of immigrants to our proud little island. Welcome in, indeed.

Sometimes, when a particularly dull document is stubbornly refusing to write itself, the only thing you can do is to reach for Rage. I don't know if it helps me get documents written, but it certainly makes me feel better. Very cathartic. I'd like to see Rage meet Nick Griffin, that's for sure....

I've never really been all that into Kate Bush, and I'm not really familiar with her work beyond the obvious... but I have discovered that I think the new album by Bat For Lashes is brilliant. It's all ethereal and breathy and wonderful. And it features a duet with one of my all time musical heroes, Mr. Noel Scott Engel a.k.a. Scott Walker. Ahh. Perfection. Plus it's nice to have a song called "Daniel" that isn't about someone's pet rat, no? (oh, hang on. That was called "Ben", wasn't it? Well, you know what I mean).

> "Save All Your Kisses For Me" - Brotherhood of Man

Yes, it's Eurovision time. Actually, this song was popped into my head as a result of Newsnight's "Immigration Song Contest", which took some young immigrant musicians to Britain, told their stories and then had them playing a Eurovision classic. Having already survived a Polish rock band covering "Making Your Mind Up", I was ill-prepared for a Somali rapper to cover this Brotherhood of Man classic. He did a respectable job, as it happens, putting his own spin on the song without completely losing the sense of the original... although I have to say that I'm not really sure what the hell newsnight were doing. Neither, I suspect, did they.

Speaking of Eurovision, our very own Troubled-Diva is the proud author the cover story on today's Guardian Film & Music supplement -- a Eurovision preview, naturally. He's been previewing the contest every year for us on his blog, but he's gone national! Well done Mike. Hurray!

"Our Earthly Pleasures" was easily my album of 2007, but after my first couple of listens to the new album, I have to say that I'm not entirely sure about the follow-up. There's nothing on here that sounds anything like "Apply Some Pressure" or "Our Velocity", but I'm sure the band would argue that it was time to move on. The result seems to be largely synth driven with some of singer Paul Smith's poetic lyrics sounding slightly awkward. Still, it's early days yet. I'm seeing the band performing live at Rock City next week, when the songs may well come to life for me. Besides, this song - the first single from the album - is really starting to sink into my head. It's true that the chorus doesn't kick in until the song is nearly over, but it's a real grower. Good band. It's nice to have them back, and I'm very much looking to seeing them live again.

"The Holy Bible" is just about my favourite album of all time. I saw the band playing at the Reading Festival in 1994, one of their first gigs after Richie had gone into rehab, and they were amazing. I tried to buy the album on the way home, on the day of release, but in those shops were still shut on bank holidays, and I had to wait. It's a work of stark brilliance. It's totally uncompromising in facing up to some of the horrors of the Twentieth Century, and it's sometimes a difficult listen, but it's the best thing they've ever done. At that gig they played a cover of Nirvana's Pennyroyal Tea, a song of unremitting bleakness that seemed to fit in extremely well with the Manic Street Preachers world view of the time. One of my favourite Nirvana songs, as it happens, and the Manics didn't let me down with their version. Brillaint band. So how excited am I by the new album, due out on Monday, which has seen the band return to some lyrics left to them by Richie before he disappeared. 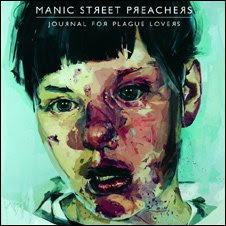 It's even got a magnificent painting on the front cover by Jenny Saville, just like the Holy Bible. Just don't try to buy it from a supermarket, eh? Idiots.

Jai Ho everyone.
Posted by swisslet at 19:08