raised on a diet of broken biscuits...

What better way of whiling away a dreary, rainy Sunday evening than by attending a marathon showcase for some up-and-coming American indie bands? Well, that's what was on offer at the Social yesterday, anyway, and as the Evening Post's intrepid reviewer was good enough to offer me his 'plus one', and there was nothing much else happening, how could I refuse?

The show officially started at 17:30, but as it was due to finish after midnight, we decided to give the first couple of bands a miss, and timed our arrival for the start of the set by the Icy Demons. The Social is pretty small venue, with a capacity of around about 200, but it still didn't seem like a sell out to me. I suppose the nature of a night like this, with so many bands on the bill over such an extended period of time, it's only natural that there's going to be a lot of to-ing and fro-ing between the venue and the downstairs bar, where food is served and the music was being played at a volume slightly more conducive to conversation. Still, the audience that there was seemed to be enthusiastic enough, even if they did appear to be on average at least 15 years younger than me. The gits.

The idea of the night was to showcase some fairly experimental US indie bands, and this seems to attract a particular kind of person. In the nicest way possible, many of them had the air of the misfit about them: there were a lot of chunky, out-sized glasses; cheap, brightly coloured sunglasses; blocky haircuts; pointy shoes; plenty of tweed; pointy brogues; MC Hammer trousers (seriously) and I also saw a guy who could not have been older than 25 years old with a huge, full ginger beard. All seemed slightly awkward in their skins, but happy enough to make a statement with their hair and their clothes, and to dance around awkwardly but happily to some often quite unapproachably awkward indie. Good luck to them. Lots of them were sensible enough to be wearing earplugs too - far more of them than I have ever seen at a gig before. Perhaps they're hoping to avoid the tinnitus that affects most of us older gig-goers. Pah. Total silence is overrated, you know.... 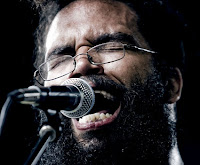 Icy Demons were up first, for us anyway, and my goodness what a lucky bag of randomness. The lead singer is called Griffin Rodriguez - a splendid name in its own right, you'd think, but he prefers to go by the stage name of Blue Hawaii. He plays what looks like an electric cello and leads his band through a bewildering array of musical styles that encompasses jazz, prog, a bit of light rapping, a touch of opera, dub..... you name an influence, and it's in there somewhere. I found them a little bit too much for my tastes, and I thought they lacked melody, but it was delivered skillfully and enthusiastically, and in Pow Pow, they have an absolutely splendid drummer, worth the price of entry alone.

Next up were Rainbow Arabia, who play their African-influenced beats on vintage Lebanese synths, apparently. Does the origin of the synth have an impact on the sound? Perhaps it does, as I was initially very unsure about the duo's sound, but after a few minutes, and once they hit their stride, they were hypnotically good. I was quite taken by the keyboardist's cloth cap / moustache combo, but it was the sheer style of his companion's guitar work and echoey vocals that stole the show for me. I've no idea how a band from LA ends up sounding like they grew up in a souk, but somehow it worked.

Times New Viking are the kind of band that make me think of Ben from Silent Words: they're a trio, with the childlike keyboards being comprehensively drowned out by the thrashy drums and guitars. Their lo-fi approach was certainly a change of pace, anyway. I was stood next to the soundboard for the duration of the set, and I was heartily amused to see a sketch, provided by the band, showing how they wanted their gear to be set up. Next to the picture of a guitar plugged into an amp was a little arrow with the word "LOUD" written all in capitals. That sums them up, really. At one point, the guitarist played the guitar refrain from "Smells Like Teen Spirit", and at a stroke reminded me that what made Nirvana great (and bands like the Pixies) was that, for all that they buried their songs in feedback and in shouting, fundamentally they understood the importance of melody. Times New Viking? Less so.

Last, but not least, were Telepathe ... a pair of sweet-looking girls who surrounded themselves with a fearsome wall of electronic noise that almost drowned them out entirely. Interesting in small doses, I suppose, and threatening in the way that the last Portishead album was, but over the course of even a short set, far too much to take in. Or perhaps, as it was now gone midnight, it was simply past my bedtime?

Perhaps none of the bands were really entirely my cup of tea, but it was an interesting evening, nonetheless. The kids certainly seemed to enjoy themselves, anyway.

Mike's review of this gig can be found here.
Posted by swisslet at 21:14